Carrie Chickering-Sears: When Your Passion Is Your Career 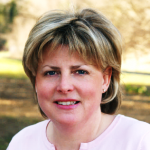 Carrie Chickering-Sears has a deep passion for animals. Fifteen years ago, she left a position as Operations Officer at a Massachusetts bank to go to work for the UMass Extension 4-H Youth Development Program. Today, she will tell you that she’s had a job for 15 years that syncs up perfectly with her interests and talents. As a dairy farmer and former 4-H dairy member, her decision was easy. She chose to leave regulators, auditors, and the inside work environment behind in favor of working with youth and adults doing things in which they, too, have devoted interests.

Chickering-Sears started as a 4-H Extension Educator focused on animal science based in Franklin and Hampshire counties. Her job then changed to a shared position between UMass Extension’s team that dealt with livestock, the University’s Department of Veterinary and Animal Science and the 4-H Youth Development Program. As a result, in 2003 she accepted a new post as Director of Community Education in Animal Agriculture.  In 2004, she started co-teaching the Animal Careers Seminar in the Veterinary and Animal Science Department. For the past 13 years, Chickering-Sears has been a member of UMass Extension Crops, Dairy, Livestock and Equine Team along with serving as the State 4-H Animal Science Specialist.

She has created several summertime 4-H livestock academies at UMass Amherst that have evolved into great successes, something she rightfully takes great pride in. Of them all, “Exploring Veterinary Science Academy” is the most popular.  The academies, which include staying on campus overnight, were created to bring teenagers to the UMass Amherst campus to meet faculty from the Department of Veterinary and Animal Science as well as staff from the Undergraduate Admissions Department. As a result of the academies, many 4-H youth return to the university as students. In 2016, three students who attended one of the first Academies graduated with Doctor of Veterinary Medicine degrees, one from Tufts, another from Iowa State, and the third from the Kansas School of Veterinary Medicine.

Her husband’s family farm is located in Cummington, Mass. where he works with his brother, milking 90 Holsteins, Guernseys and Jerseys. This fourth-generation working farm was originally built for William Cullen Bryant’s granddaughter. The other farm is in South Deerfield and has been in her family for five generations. Heifers and a couple of cows are now housed at this site. It originally grew tobacco and eventually became a dairy farm under her great-grandmother. Her parents returned to the farm from New Hampshire in 1973. Her mother was an only child, as she and her daughter are, and they all inherited a love for dairy cattle--her mother was once an “American Dairy Princess.”

In 2007, Carrie’s daughter, Ashley Sears, made dairy history with her homebred cow – ‘Pistachio Pie’-- by raising the first cow in history to win in the supreme category (best in show) of both the open and junior show at the World Dairy Expo in Madison, Wisconsin. At the time, Ashley had just started her freshman year at Cornell in Agricultural Economics, majoring in Dairy Science. “Pie” is still alive at 14 ½ years and this year was recognized at the Expo on its 50th Anniversary. Pie’s son “American Pie” was sold to a syndicate in 2007 and was named the Premier Sire of the Guernsey Show this year, completing one of Ashley’s goals.  In recent years, Ashley graduated from Western New England Law School and is now an attorney with the Maine Department of Agriculture.

When not busy at UMass, Chickering-Sears enjoys exhibiting and judging at various dairy shows across the country. This allows her to network with other professionals and make contacts for future clinicians at the academies. She also keeps alert to possible internships for college students and 4-H members. This is a woman who loves her work – and it shows.