Summary: A dramatic and possibly widespread outbreak of the oak shothole leafminer (Japanagromyza viridula synonym Agromyza viridula) and oak anthracnose (Apiognomonia errabunda) has occurred this season. To date, samples and observations of the outbreak have been made in western and eastern Massachusetts, coastal Rhode Island, southern New Hampshire, eastern New York and eastern Pennsylvania. The oak shothole leafminer is a small fly in the family Agromyzidae. Not much is known about this particular species, although very short-lived outbreaks of this insect on ornamental oaks have been recorded in New England in the past. The oak anthracnose pathogen appears to be readily colonizing foliage damaged by the leafminer. The anthracnose damage appears mostly minor to moderate in severity (leaf spots and blotches). However, for some trees the disease has been far more damaging (leaf wilting, death and premature shedding). Infected leaves may have tan to brown-colored spots and blotches or appear blackened and wilted.

Oak Shothole Leafminer
The oak shothole leafminer is considered native to the United States, although very little is known about this species and other agromyzid leaf miners. It is reportedly found throughout the eastern U.S. from Maine to Georgia, and likely the entire eastern half of the United States. Joe Boggs of Ohio State University Extension recently reported on increased activity from this insect in Ohio (https://bygl.osu.edu/node/1296) at the same time the UMass Plant Diagnostic Laboratory was receiving an increased number of samples. Based on samples submitted to the UMass Plant Diagnostic Laboratory, damage to individual trees from the shothole miner and anthracnose is severe in some cases.

The damage caused by the activity of the adult female oak shothole leafminer is characteristic of this fly species. Adult female flies are active when red and white oak buds are just opening and until the newly developing leaves are approximately 5 cm (~2") in length. The holes seen in these samples were created when these leaves were no more than 4.5 cm (~1 3/4") long. This damage is caused by the adult female fly feeding. Because the fly’s mouthparts are unable to pierce the newly developing leaf tissue, it uses its ovipositor to cause enough damage such that any fluids leaking from the leaf can then be lapped up. The female fly will move the ovipositor in side-to-side and circular motions, creating initial injury that is no more than 0.7 mm (~3/100") at its widest point on the tiny, newly developing leaves. The area injured by this action soon turns brown and dries, eventually forming a small disk. This disk of necrotic tissue often remains conspicuously attached to the expanding hole formed in the leaf. As the leaves grow in size, the damage from these flies enlarges, and the holes are described to be approximately six times the size of the original injury created by these tiny flies, who are themselves about 3 mm (~1/10") in length. Occasionally, the female fly will lay an egg in the leaf tissue.

The eggs hatch and mining from the larvae of the oak shothole leafminer is reported to occur in the second week of June in Maine, while in Ohio Joe Boggs reports the blotch mines created by this insect to be most evident in early to mid-May in that state. Reportedly, fully grown larvae emerge from their mines to drop to the soil to pupate. Johnson and Lyon (1991) states that although adults are present the following spring, they may also reappear later in the same season “if a second flush of growth takes place or water sprouts (epicormic shoots) develop”. The oak shothole leafminer is not usually considered a significant pest of oak, and the damage it causes typically does not have a significant impact on the overall health of the tree. However, in a 1967 paper detailing observations from the 1960’s in Maine, there is a question about the economic importance of this species on ornamental oaks. In 1964, an “abundance of neat, prominent holes in foliage of ornamental red and white oaks (Quercus borealis var. maxima and Q. alba) in southern Maine” was observed. This was again observed in 1965. The cause, at the time determined to be Japanagromyza viridula, was identified by the State Entomologist with the Maine Forest Service and partners in the USDA. Their observations stated that many more “punctures” are made by the female for feeding than for oviposition (egg laying) and this is a common pattern of flies in this family. This might explain why the damage from the feeding adult females seems so extensive, whereas the mines from the feeding larvae of this insect are not present in the same proportion and may even be difficult to find.

In 1965 in Maine, the first discovery of adult flies was made in mid-June on red oak sprouts. Feeding punctures from female flies was described as numerous, while egg laying was relatively rare. “Mines were of a blotch type.” Larvae emerged from their mines before pupating. Not much is known about the life cycle or its timing during the season for this insect. This 1967 paper suggests that multiple hosts may occur for the flies, although that is not certain either. Based on what occurred in Maine in 1964 and 1965, the authors suggest that the injury caused by the peculiar feeding habits of these flies may be economically important on ornamental oaks. At the time, ornamental white and red oaks were widely affected by the shot-hole injury in much of southern Maine. However, only circumstantial evidence was available to suggest that, under certain conditions, the emergence of agromyzid flies and the co-occurring appearance of juvenile foliage of oak may allow extensive attack. Following the widespread activity of this insect in 1965, “the infestation expected in the spring of 1966 did not materialize for some unknown reason”. Perhaps, like what happened in Maine in the 1960’s, we’ll never be able to explain what has allowed for heightened activity of this insect in 2019 in Massachusetts, as this phenomenon may be ephemeral in nature.

Oak Anthracnose
Oak anthracnose is caused by the fungal pathogen Apiognomonia errabunda. The disease can occur in all oak species present in the region. However, members of the white oak group (e.g. white and swamp white oak) are particularly susceptible to the disease and tend to suffer greater damage. Most often, oak anthracnose causes only limited damage to landscape oaks, typically on shaded, lower canopy branches. However, after prolonged periods of wet weather early in the growing season, especially on members of the white oak group, damage can be severe. It appears that the oak anthracnose pathogen is utilizing wounds created by the oak shothole leafminer to cause widespread damage in the canopy of infested trees in some cases.

Symptoms first appear as water-soaked, blighted leaf margins or as blotches along primary veins as new foliage develops. Over time, lesions become dry, papery and gray-colored or the leaves become blackened and wilted. Pubescent leaves can become distorted or shriveled and may be shed prematurely from the canopy. Mature leaves are more resistant to infection, having developed their thick, waxy cuticle and lesions on these leaves are often smaller in size. Apiognomonia produces the majority of its spores asexually from pads of fungal tissue that rupture through the surface of the leaf and petiole. They are very difficult to see, even with a hand lens. The pads (known as acervuli) can be found on the upper or lower surface of the leaves, along the veins or midribs, while on twigs, they appear orange-brown and darken over time. Spores are spread mostly by wind and running or splashing rain water. Twig infections are known to occur on white, black, red, and scarlet oak and may occur on other species as well, especially if wet conditions persist into mid-summer. Twig dieback may lead to secondary colonization by wood-boring insects (e.g. Agrilus) and stem cankering fungi (e.g. Botryosphaeria s.l.).

Disease outbreaks usually subside by mid-summer when conditions become warmer and drier. In autumn, when cooler weather returns, there is often resurgence in disease development as the pathogen exploits senescing foliage. Resting structures then develop, which allows the pathogen to overwinter. In the spring, spores are produced from surviving propagules and the cycle repeats. When healthy trees are defoliated early in the season, most have the reserves to produce a second flush of foliage and suffer only minor growth losses. When oaks are weakened by other stresses, such as gypsy moth or Armillaria root and butt rot, the effects of oak anthracnose are amplified. At this point in the season, it is too late to treat for oak anthracnose. 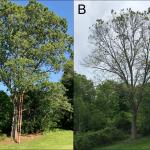 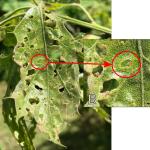 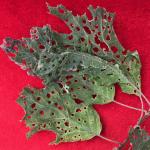 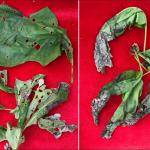