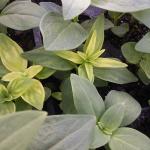 As follow up to our April 1 update, problems with iron inefficient crop species continue. In the last week, symptoms of iron deficiency were reported for both snapdragon and Calibrachoa crops. A characteristic symptom of iron deficiency is interveinal chlorosis on young and developing leaves. Since iron is required for chlorophyll synthesis, the yellowing is caused by the emergence of young leaves that arise despite the absence of enough iron to support healthy green color.

Both snapdragon and Calibrachoa species are included in a group typically referred to as the ‘iron inefficient’ or ‘iron sensitive’ bedding plant species, because of reduced capacity to obtain iron from growing media relative to other crops. As such, these species are especially prone to iron deficiency.

Since iron is less available to plants at higher pH values, and more available at lower pH values, the principle strategy for preventing iron deficiency in iron inefficient species is to maintain media pH in the range of approximately 5.5-6.2. This is accomplished through practices such as attention to starting pH of growing media, and careful and consistent monitoring of pH levels throughout the crop cycle. Tools for influencing pH levels include management of alkalinity in irrigation water, and the use of fertilizer sources which, depending on formulation, may help to either lower or raise substrate pH.

Other tools for preventing and managing iron deficiency problems in iron inefficient species include optimizing phosphorus fertility (excess P can reduce iron availability due to the formation of insoluble iron phosphates) and preventive and/or curative applications of chelated iron.

While iron deficiency in iron inefficient crops is a common occurrence, when symptoms arise it is important to consider other possible issues that may be in play before taking action: