During this cool, wet spring, we have received several reports of yellow, stunted vegetable transplants, with irregular growth and some marginal leaf burn particularly among the lower leaves. Samples submitted to the UMass Soil and Plant Tissue Testing Lab for saturated media tests confirmed that ammonium levels in these potting mixes were very high (500-700ppm) while the optimum range is considered to be 0-10ppm. Thanks UMass Soil Lab! Nitrogen from organic matter or fertilizers in potting mixes will rapidly convert to ammonium (NH4+) but when the weather is cool and soils are saturated, the aerobic bacteria needed to convert ammonium to nitrate (NO3-) are not active. Sterilized soils or some soilless media may also lack this nitrogen converting bacteria, so fertilizer sources with nitrate such as calcium nitrate should be included. When ammonium is excessive, plants can easily take up too much, causing cell damage. Unfinished compost that is high in nitrogen sources, such as poultry litter or vegetable waste, can be high in ammonium as well. To reduce ammonium toxicity, increase greenhouse temperatures, allow soils to dry out between watering, pot transplants up into a new mix with more carbon sources, such as peat, and get them out in the field when conditions are favorable! P.S. ammonium toxicity can be considered a form of salt injury, which is often influenced by irrigation, so you may be interested to read the article in the latest issue of UMass Extension's Vegetable Notes newsletter about managing irrigation in high tunnels for more information. 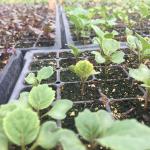 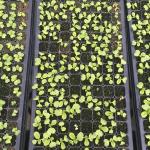