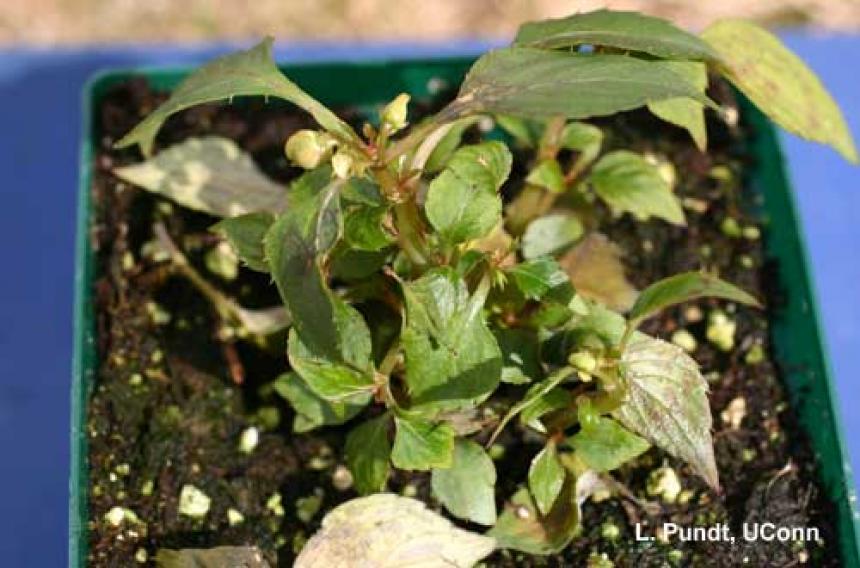 Downy mildew is a relative of Phytophthora and Pythium. Symptoms appear as a light gray colored, fluffy growth on the underside of leaves as seen in this photo. The discolored foliage on the upper leaf surface could be confused with a nutritional deficiency. Downy mildew symptoms appear very rapidly and tend to be much more difficult to control than powdery mildew. Conditions that promote leaf wetness, such as high relative humidity, overhead irrigation and close spacing, favor this disease. With a hand lens, closely examine the bloom of sporangia (microscopic stalks bearing spores) on the underside of the oldest leaves. (They will look like many tiny branched trees, each bearing tiny lemons). This can help you distinguish downy mildew from powdery mildew. Downy mildew sporulation also tends to occur on the underside of the leaves, whereas powdery mildew can occur on either the upper or lower surface.

It is important to distinguish between downy and powdery mildew because they are managed differently. Many of the fungicides labeled for powdery mildew will not control downy mildew.

Downy mildew caused by species of Peronospora,Bremia, Plasmopara, and Basidiophora has become a serious problem in the ornamental industry. The pathogens are obligate parasites that infect certain species of ornamentals selectively. Control depends on fungicide applications, the use of resistant cultivars, and cultural practices. Minimize periods of leaf wetness by reducing density of the plant canopy and avoiding overhead irrigation. Sporangia are easily spread by splashing water,wind, or handling. Downy mildew fungi may reside in plant debris or weed hosts. Remove infected plants and weeds. Scout greenhouses regularly for symptoms of Downy Mildew and apply fungicides on a preventive basis in a regular spray program. Fungicides registered for Downy Mildew include Alliette, Alude, Stature, Subdue Maxx, Heritage, and Compass O. Apply these chemicals in a tank mix with contact fungicides such as chlorothalonil, copper, or sulfur and rotate among chemical classes to prevent fungicide resistance development in the pathogen population. 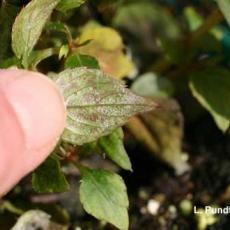 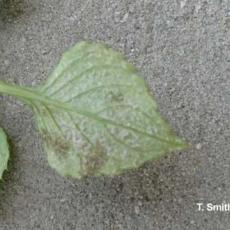 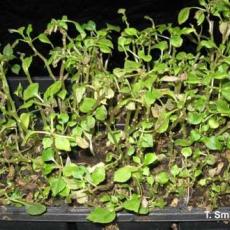