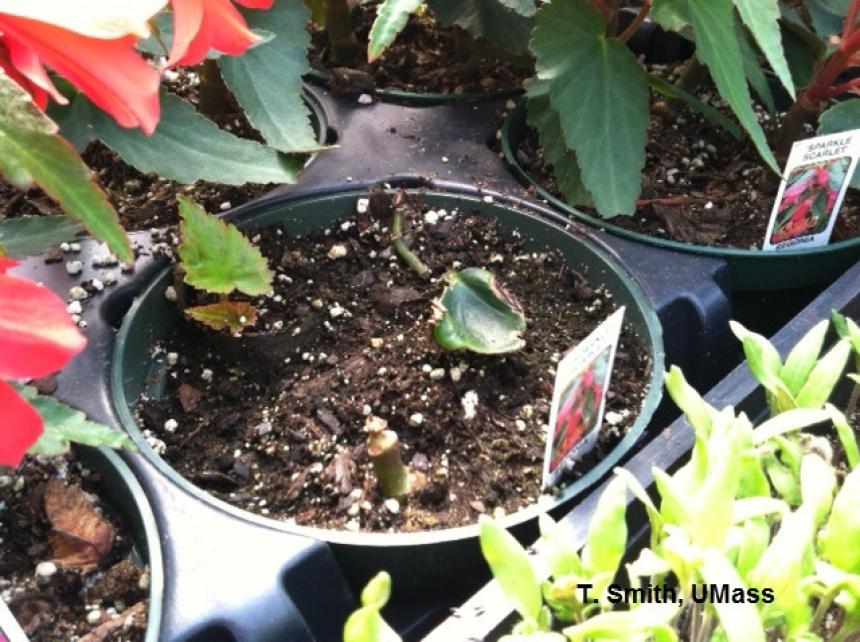 Begonia plants (April) in greenhouse, thought to have been eaten by voles.

Rodents such as meadow voles and mice can cause extensive damage to plants in greenhouses. Meadow voles are active day and night, throughout the year and do not hibernate. They feed all winter long on tubers, bulbs, rhizomes, stems, roots, and seeds and occasionally on insects and animal remains. Meadow voles construct extensive tunnels and surface runways with numerous burrow entrances, often between or under pots. These surface runways are the most easily identifiable sign of voles, however, clippings or stems, stripped of foliage, in piles along their runways are also signs of their activity. By the time the runways are noticed, the damage is usually done. Voles are prolific breeders, especially in the spring and summer months however, they may breed throughout the year.

Outdoors, white footed mice often feed on seeds, berries and nuts. However, these nocturnal creatures can also enter greenhouses and feed on seeds and young seedlings. Often, growers will cover seedlings with glass or fiberglass sheets to prevent their feeding damage.

Monitoring: The apple sign test has been used in orchards to monitor activity of voles, and can be used in greenhouses too. Use shingles or wood pieces that will blend into the surrounding soil. Slightly arch the shingle so that an animal can fit under it. Leave the shingles throughout the scouting area for five days, to allow rodents to adjust being there. After 5 days, place small cubes of apple under the shingles. Monitor the apple bits for signs of feeding. This will indicate the areas where control efforts should be practiced.

Rodent Proofing: The first step is to rodent proof the greenhouse (as best you can). Mice can get enter through openings as small as ¼ inch. Use fine mesh screen such as hardware cloth around the perimeter of the greenhouse at least 6 inches deep and bend outward at a 90ᴼ angle.

Sanitation: Sanitation will also do a great deal to control rodents. Eliminate protected areas for rodents around greenhouses. Most of our wildlife animals will not venture across a wide-open space because they are much more vulnerable to natural predators.

Traps and Baits: Snap traps can be effective if the populations are low. Traps should be set with a good understanding of the behavior of the rodents. Rodents are creatures of habit and prefer to follow the same runways. Identify the runways and place the traps perpendicular to the runways. Baits include: peanut butter for mice or a piece of an apple for voles (Cortland apple works well). Note that repellents do not seem to be consistently effective.

If trapping fails to reduce the population, growers find that using toxic baits (rodenticides) are effective.