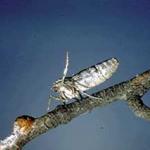 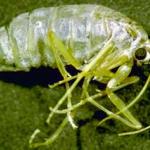 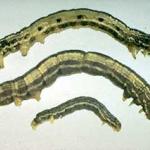 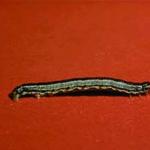 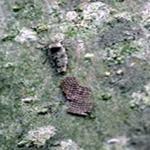 Cankerworms are caterpillars when immature and later develop into moths as adults. As immatures, they have elongate, cylindrical bodies with a well developed head capsule. In addition, they also have 3 pairs of thoracic legs. Further back on the body, they also have 2-3 pairs of abdominal legs known as prolegs. The Spring Cankerworm has 2 pairs while the Fall Cankerworm has 3 pairs.

Both the Spring and Fall cankerworm eggs hatch about the same time in the spring. In Massachusetts, hatch occurs about mid-May. Caterpillars of both species may be found feeding together in mixed populations on the same host plant. The larvae feed on the foliage of many deciduous trees including: oaks, cherry, elm, apple, maples, and others. Their feeding initially causes the foliage to become very tattered in appearance but later they may completely defoliate the entire host plant. The immature stage (caterpillar stage) lasts until about the end of June in Massachusetts.

Adult male moths of the Fall Cankerworm sometimes become nuisance pests in late November and into December because they are very attracted to night-time holiday lighting.

Bacillus thuringiensis, commonly known as B.t., is sold under many different trade names and is quite effective against the younger caterpillars. This product is relatively "safe" when compared to traditional chemicals.

Cankerworm populations tend to build up into large, damaging numbers over the course of several years and then almost entirely disappear due to natural causes in the environment.