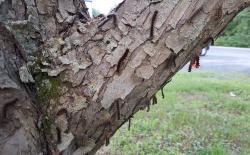 Gypsy moth caterpillars are dying across Massachusetts! Reports had been trickling in throughout most of June, and if you follow the Landscape Message, you will know that Dr. Joseph Elkinton’s Lab at the University of Massachusetts has been documenting fungal (Entomophaga maimaiga) activity for a couple of weeks now. E. maimaiga is of course an insect-killing fungus that is quite specific to gypsy moths.

However, at the end of last week and through the weekend (6/24 and 6/25), reports of caterpillar mortality (with photographic evidence) have flooded in to UMass Extension from various locations, including but not limited to the following areas of Massachusetts: Amherst, Belchertown, Bernardston, Boylston, Brewster, Brookfield, Cotuit, Eastham, Falmouth, Hanson, Hingham, Marlborough, Marstons Mills (Barnstable), Milford, Monson, North Attleborough, Pelham, Plymouth, Sturbridge, Wellfleet, West Bridgewater, West Brookfield, Yarmouth, and much of Cape Cod and the South Shore. The spores of the fungus (Entomophaga maimaiga) have been confirmed from samples taken from many of those areas and the NPV virus was confirmed active in Hanson, MA and is likely active in other areas as well. 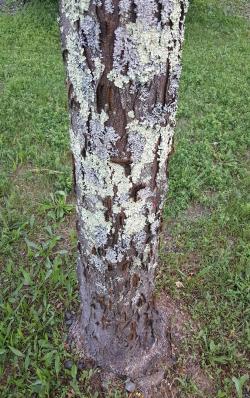 For example, a population of gypsy moth caterpillars was observed to be “otherwise healthy” and feeding on a crabapple at a location in Amherst, MA on Sunday, 6/18/2017. (They had already done a number on nearby oaks in the area.) By Friday, 6/23/17, the caterpillars were either shriveled up and hanging vertically from the trunk and branches of the tree (may be indicative of Entomophaga maimaiga) or juicy and drooping in this location in an inverted-V shape, which may be mortality caused by the NPV virus that kills gypsy moth. (The only way to truly tell which pathogen is responsible is to look at samples from the dead caterpillars under a microscope.)

Unfortunately, gypsy moth caterpillars are still responsible for some widespread defoliation in certain areas of the state this year, as seen in these photos from Ware, MA (taken on 6/24/17). Many caterpillars survived long enough to reach the size where they are able to partially or completely strip the leaves from their host trees. Partial or complete defoliation of trees due to gypsy moth can be seen on either sides of the MA Turnpike (I-90), particularly from Wilbraham to the Charlton Plaza when travelling eastbound. More updates about estimated total acreage defoliated by gypsy moth in 2017 will become available once the Massachusetts Department of Conservation and Recreation is able to complete their aerial survey of the state. This survey began only recently, in order to most accurately capture the defoliation caused by these caterpillars (those not killed by the fungus are still feeding, particularly the female caterpillars who undergo an additional instar, or developmental stage, than the males).

Residents in Massachusetts, particularly in southern central MA and the southeastern portions of Franklin, Hampshire, and Hampden counties still experienced high populations of this insect in 2017, many dealing with caterpillars dropping in driveways along with shredded leaves. Caterpillar frass (excrement) could be heard raining down from tree canopies at various locations, often covering patios and lawn furniture. The recent wave of mortality sweeping gypsy moth caterpillars is a welcome sight for many.

Just as we may be able to credit (mostly) the drought conditions experienced in 2015 and 2016 with the recent increase in the gypsy moth population (through the impediment of Entomophaga maimaiga activity), we can credit the more normal rainfall events seen in May and June of 2017 for the success of the fungus this year. Although we have been waiting for this with much anticipation and wish the caterpillar collapse occurred sooner, it is certainly better than the alternative. Hopefully, this outbreak of these pathogens in this year’s gypsy moth population will mean a reprieve for many from this insect in 2018. The Elkinton Lab reports that fungal activity was particularly pronounced on Cape Cod and the South Shore, and it seems that in many other areas across the state, the fungus has kicked in just in time. 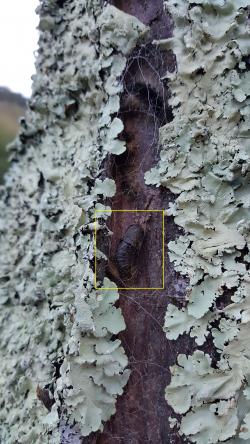 Gypsy moth caterpillars (those that survived) have also begun to pupate in many locations. (The pupae, or “resting stage”, do not feed and neither do the adults, so management is no longer necessary this season.) Those that successfully pupate will become adults, which will mate (particularly in July) and the females will lay their fuzzy, tannish-brown egg masses, which will overwinter and provide caterpillars for 2018. Our hope is that we will see fewer males (brown moths that fly) and perhaps most importantly fewer females (white colored moths that, although they have wings, do not fly) which will lead to fewer egg masses to hatch in 2018. Fewer: that is not to say that these insects will 100% disappear from the landscape next year. However, hopefully the population will drop below nuisance levels at least some locations. The Elkinton Lab reports as of 6/28/17, with the exception of one of their research sites in Massachusetts, 80-90% of their sampled caterpillars have perished. This is certainly excellent news, however we should keep this in perspective, given that each female moth can potentially lay, according to Dr. Elkinton, approximately 300 female eggs. Even if 298 of those individuals die before maturity in 2018, the population could still theoretically increase.

Therefore, we rejoice in the fact that the fungus and virus are finally active in the gypsy moth population this year as compared to recent years, but remain cautious. We will continue to watch the number of caterpillars that make it to pupation in the next week or so, and keep an eye on the adults and the number of egg masses the females lay. Overall, having these grotesque caterpillars stuck to the sides of our trees is a great thing. In many areas, they are full of the hardy, long-lived resting spores of Entomophaga maimaiga, which are capable of overwintering and providing continued infection of this insect’s population for many years to come.

Look to the Landscape Message for more detailed updates about gypsy moth and other insect pests throughout the 2017 season: https://ag.umass.edu/landscape/landscape-message . You can also “Like” and “Follow” us on Facebook @UMassExtLandscape to receive timely updates.