Report Any Signs of the Spotted Lanternfly in Massachusetts 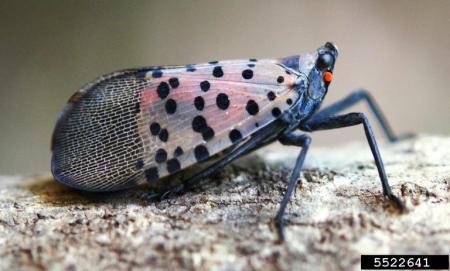 Report Any Signs of the Spotted Lanternfly in Massachusetts

They announced the finding of two dead specimens of SLF in Massachusetts communities, and are urging residents to report any sign of this invasive pest. The specimens were recovered in the towns of Milford and Norwood, and were brought into Massachusetts on materials shipped from Pennsylvania counties currently under a spotted lanternfly quarantine. Additionally, according to the September 25, 2020 press release, MDAR was recently notified that nursery stock with spotted lanternfly egg masses and adults may have been unintentionally imported and planted in several parts of Massachusetts.

According to new research, the spotted lanternfly is known to feed on at least 103 species of plants (Barringer and Ciafré, 2020), including the invasive tree of heaven (Ailanthus altissima), but also apple (Malus spp.), plum, cherry, peach, and apricot (Prunus spp.), grape (Vitis spp.), birch (Betula spp.), dogwood (Cornus spp.), maple (Acer spp.), oak (Quercus spp.), willow (Salix spp.), and many others. While damaging to agriculturally and horticulturally important plants, this non-native insect is also a nuisance to landowners. The spotted lanternfly can gather in areas where it has become established in large numbers. It feeds with piercing-sucking mouthparts on host plant fluids, and secretes massive amounts of sugary excrement known as honeydew. Honeydew can coat surrounding plants and lead to the growth of sooty mold and attract stinging insects (wasps, hornets, bees, and ants) that come to the area to feed on the sugary liquid. Grape vines have been killed in Pennsylvania vineyards. Death of ornamental trees as a result of spotted lanternfly feeding has not yet been reported, however flagging on black walnut has been seen in PA.

MDAR is urging anyone who has received goods or materials, such as plants, landscaping materials, or outdoor furniture, from a state with a known SLF infestation to carefully check the materials, including any packaging, for signs of spotted lanternfly. Currently, there are known introductions of SLF in Connecticut, Delaware, Maryland, New Jersey, New York, Pennsylvania, Virginia, and West Virginia. For more information about this most recent press release, please visit: https://www.mass.gov/news/state-agricultural-officials-urge-residents-to-report-signs-of-invasive-spotted-lanternfly .

Because no live lanternflies have, as of this press release, been found in Massachusetts, there is currently no evidence that SLF has become established in the Commonwealth. As a precaution, MDAR has planned surveys in the areas where the insects were found, to confirm that no live populations are present. While a dead lanternfly was previously found in the Boston area, in December of 2018, repeated surveys have found no further signs of SLF in that part of the state.

For a map of known, established populations of spotted lanternfly, as well as detections of single, dead individuals outside of these areas (not indicating establishment), visit: https://nysipm.cornell.edu/environment/invasive-species-exotic-pests/spotted-lanternfly.

For more information about the spotted lanternfly, please visit: https://ag.umass.edu/landscape/fact-sheets/spotted-lanternfly.

If you have seen any of the life stages of this insect pictured here in Massachusetts, please report it at: https://massnrc.org/pests/slfreport.aspx. 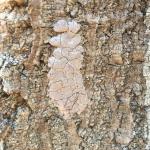 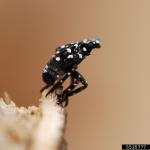 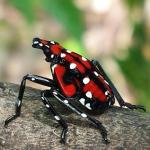 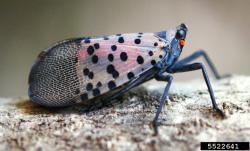 Are there similar looking species? This fact sheet from MDAR has a link at the end to a guide to some common look-a-like species: https://massnrc.org/pests/pestFAQsheets/spottedlanternfly.html.