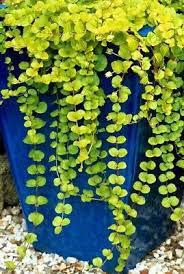 Creeping Jenny (Lysimachia nummularia) is a low-growing, creeping perennial plant that has long stems with pairs of round green leaves, and yellow flowers in summer. It is often touted as a good ground cover for wet areas, and its trailing foliage is used for decoration in hanging baskets and other planters. But creeping Jenny is also one of more than 100 invasive species on the Massachusetts Prohibited Plant List, meaning it cannot be sold, imported, or propagated in our state. With so many species on that list, this is one that sometimes sneaks by unnoticed in nursery and garden retail settings. This post is a reminder that you should not buy or plant this invasive species.

Creeping Jenny loves moist habitats and was once commonly recommended for planting in these areas. Unfortunately, the same properties that make it a desirable ground cover for gardeners and landscapers turn it an effective invader in natural wetland ecosystems. It is known to escape from cultivation into forested floodplains and other wetlands, where it often forms dense mats. It is also a prolific producer of seeds. For these reasons, creeping Jenny has been prohibited from sale in Massachusetts since 2009, after a review by the Mass. Invasive Plant Advisory Group (MIPAG).

MDAR has an active consumer reporting system in place, and you could be reported if you offer creeping Jenny for sale in Massachusetts. The most common cultivars are probably the yellow-leaved ‘Aurea’ and ‘Goldilocks’. If you are a retailer and have been shipped this species from out of state, please contact the originating producer to return the plants, or contact MDAR at jennifer.forman-orth@mass.gov for assistance.