Massachusetts 4-H Clubs Feed the Hungry with Over 8.5 Tons of Food 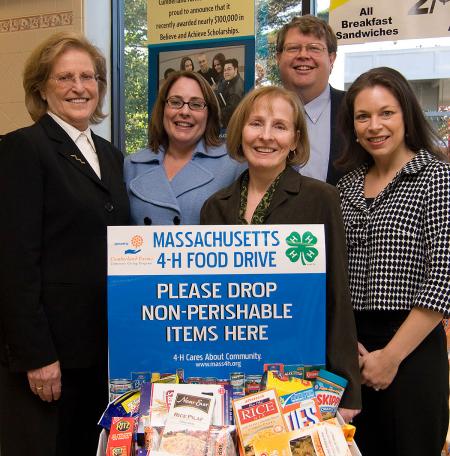 Massachusetts 4-H clubs this winter collected 17,310 pounds of food for more than 100 local food pantries and homeless shelters in the state, exceeding last year’s record by 50 percent. The clubs also raised more than $1,000 in cash.

Clubs in every area in the state took part in the “4-H Cares About Community” food drive, which began National 4-H Week in October. The drive was sponsored by Cumberland Farms, which placed collection boxes at its stores throughout the state from October 27 to November 15. For the second year in a row, Barnstable County led the state with 2575 pounds of food reported through mid-December, followed by Worcester County with 2487 pounds, and Plymouth County with 2350 pounds. The largest single club donation reported was 900 pounds collected by the Pioneer K-9 Club which donated their food to the Northampton Survival Center. 4-H clubs across the state reported that donations were continuing in January.

Even before the current recession, one in every seven Massachusetts residents lacked adequate food, according to the USDA and US Census Bureau. That is nearly 450,000 people in the Commonwealth alone. Hunger is on the rise and the Project Bread Status Report on Hunger in Massachusetts reports that the prevalence of hunger in low-income communities has reached an all-time high.  With the current economy and harsh winter weather, many more families will increasingly need to choose between heat and food this year.

“This is proving to be an especially difficult winter for more and more people, and for more and more emergency services,” noted UMass Extension 4-H Educator Karen Barshefsky. “It has been hard for shelters and pantries to keep up with the need.”