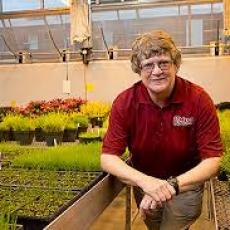 Pat Vittum received a B. S. in Chemistry from The College of Wooster in Ohio in 1974 and earned her Ph. D. in Entomology from Cornell University in 1980. Her doctoral advisor was Dr. Haruo Tashiro, who was an international expert in the biology and ecology of turf insects, especially white grubs. She has been at UMass since June 1980. She spent the first ten years at the Waltham Field Station (10 miles west of Boston), working in commercial floriculture and turf. She moved to the main campus in Amherst in 1990, where she taught three courses a year for almost 30 years until her retirement in 2017. Those courses were: “Pesticides in the Environment” targeting Environmental Science majors; “Turfgrass Insects”; and “Integrated Turf Management”, the latter targeting turf management seniors and graduate students. Pat is the sole author of the third edition of “Turfgrass Insects of the United States and Canada”, widely regarded as the bible of turf entomology. Her research interests involve the biology and management of several turfgrass insects, including white grubs and annual bluegrass weevils, and optimizing the effectiveness of biological control alternatives. She served as the interim director of CAFÉ for two years, and was delighted to relinquish the reins to Jody Jellison in January 2016. Pat received the Distinguished Service Award from the United States Golf Association in 2015 (the second woman in history), and was the first woman ever to receive the Distinguished Service Award from the Golf Course Superintendents Association of America in 2017. She has been similarly recognized by several regional associations.