Recognize that no soil test currently exists that can reliably inform nitrogen (N) applications to turf in the Northeast.

Table 10 lists the most common WSN sources used by turf managers. Of these fertilizers listed, urea is the most commonly used source of N in most complete fertilizers. Calcium ammonium nitrate, ammonium sulfate, and potassium nitrate have a higher salt index and are more likely to burn the turf than urea. Mono- and diammonium phosphate are used in fertilizers when phosphorus input is also desired.

Isobutylidene diurea (IBDU, 31% N) is a material which releases N as a result of very slow solubility in water. The physical process is essentially similar to dissolving of sugar or some other soluble product only at a much reduced rate. Finer particle size products are available for use on low cut areas or where a more rapid response is desired. Because moisture is necessary for release, IBDU is not a good choice for non-irrigated turf areas. Conditions that are not favorable for moisture retention such as excessive thatch will be less favorable for N release from IBDU. In addition, IBDU will not release as effectively on alkaline soil with pH above 7.7. Because release is not affected by temperature, IBDU is a good choice for early spring when adequate natural rainfall is usually plentiful. IBDU is not commonly found as the nitrogen component in most complete fertilizers.

Sulfur Coated Urea (SCU, 32-36% N) and plastic coated urea (PCU) products release N slowly because the urea pellet (prill) is covered with a coating of sulfur, plastic or both. Thus, N leaks through the pores at a slow rate compared to uncoated urea. Prills which have an incomplete or cracked coating will behave like WSN. Thinly coated prills will release N more rapidly than thickly coated prills. Adequate moisture and warm soil temperatures (warmer than 55°F) are factors favoring release of N from SCU and other coated urea fertilizer products.

Use slowly-available SRN along with readily-available WSN for fertilizer applications, especially on sandy soils prone to leaching.

Know how to determine the SRN content of a fertilizer material.

32.9% of the nitrogen in the example fertilizer is SRN.

When using natural organic sources of N, take care not to over apply phosphorus.

Current fertilizer guidelines may call for as much as 4 lbs. N per 1000 sq. feet per season for the turfgrass species present on a site. Guidelines for N input to turf are exactly that: guidelines. If turf of acceptable quality can be maintained at a rate lower than 4 lbs. N per 1000 sq. feet per season, then reducing the rate is justified and helps to reduce labor, fertilizer cost, and the potential for excess nutrients in the system.

Lower N rates may be possible where: 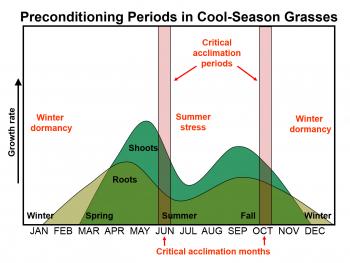 Determine the frequency of fertilizer applications based on the nitrogen characteristics of the fertilizer material.

‹ Developing a Fertility Program up Phosphorus and Potassium ›
Back to top