Understand that traffic results in wear and compaction stress.

Plant wear and compaction tolerant grasses to alleviate losses in function and quality. 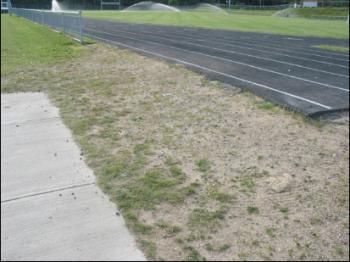 Monitor and manage thatch to maximize the benefits and prevent associated problems.

Understand what thatch is and the implications of thatch layer thickness.

Include turfgrass cultivation in the management plan to manage traffic stress and thatch and improve the overall health of the turf system.

Address soil compaction to reduce problems caused by alterations in the physical properties of the soil.

Example: 1,000 square feet of turf after a single aeration event using a 3/4 inch diameter tine, spaced two inches on center, with a tine penetration depth of 2 inches, would be equivalent to 2180 square feet of surface area.

Recognize that core aeration can be utilized to manage thatch.

Give appropriate attention to cultivation timing and frequency for maximum benefit.

‹ Mowing up Weed Management ›
Back to top