2020 Annual Bluegrass Weevil Season About to Start in New England

Growing degree day (GDD) accumulation started in early March and had been increasing relatively rapidly up to mid–March, with a couple days in the high 60s F, for most of our monitoring locations. This rapid accumulation was a warning of a possible early and warm spring and a fast-paced annual bluegrass weevil (ABW) spring season. But since about the middle of the month, the weather has cooled down considerably and GDD accumulation has plateaued. Most New England locations are currently at 50 to 60 GDDs. The most optimal timing for an adulticide application is at 100-120 GDDs. According to weather forecasts high temperatures will stay below the 60s, so we are not accumulating degree days very rapidly. It might take at least a week to get to 100 GDD, which is the recommended starting point for adulticide applications.

Forsythia is in full bloom in much of MA and CT. When Forsythia begins to leaf out and reaches the “half green-half gold” stage, that is a good indicator for applying adulticides. Bradford pears are also blooming now, with some approaching full bloom in the Springfield area. According to our recent observations, and similar to Forsythia, after the green leaves of Bradford pear start to show and it becomes “half green–half white” it is another reliable indicator. In any event, we are still several days from seeing Forsythia “half green-half gold”. The current GDD accumulation is right in the “normal” range for southern New England.

The first ABW adults can usually be seen on the short cut grass when Forsythia is in full bloom. However, we already started seeing weevils on fairways at some locations during the end of March and early April. The number of weevils on the short grass has been increasing for the past couple of weeks. Upon dissecting the weevils, we found that 80-100% of the females have fully developed eggs, indicating that the majority of the migrating females have broken their reproductive diapause but most likely are not quite ready to lay eggs yet.

You can conduct soap flushes, vacuum, make visual inspections of greens, and look for adults in clipping baskets after greens mowing to track adult activity and detect peak densities of adults. Observations of adult activity, plant phenology (Forsythia half green-half gold) and degree day accumulation (100-120 GDD) will help to pinpoint the optimal timing for an adulticide application. Timing is crucial for adulticide application. Insecticides for adult treatment [chlorpyrifos (organophosphate) and pyrethroids (bifenthrin, lambda-cyhalothrin and others)] have short residual activity and if applied early might not protect from weevils that move to short cut grass later.

Soil temperatures now are in the range of 46-48°F. White grubs have moved to the root zone and started feeding. This is a good time to monitor white grub populations and begin to think about decisions for grub management this summer. We have conducted small scale grub sampling in a few locations. Some of the collected grubs were already in the prepupa stage. Curative spring applications are usually not recommended for white grubs, partly because the grubs seem to be much less susceptible to insecticides in the spring. (They are larger than they were the previous fall, and their physiology is beginning to change in preparation for pupation in June or July). 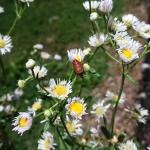 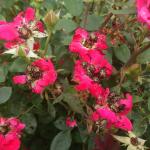