All indications are that we will be off to an early start with annual bluegrass weevil activity on golf courses this spring compared to the 2020 season. The winter and spring in MA have been close to "normal" according to temperature data. Soil temperatures (at about 1” below the surface) averaged approximately 32° F during the winter months and did not fluctuate significantly. Recent soil temperatures are 50-54° F in many locations. It has also been quite dry, with most regions of New England in the “dry” or “mild drought” stage, which might affect plant phenology.

Growing Degree Day (GDD) accumulation started in the second week of March and has been slow in the beginning with relatively steady increases through late March. GDD accumulations are not very different across the state and were around 100-116 by mid- April. Many of locations in western and southern parts of the state are very close to the peak for adulticide application. The eastern part of the state is slightly behind, although not by much this year (up to 104). At the coastal location that we are monitoring this year (Swampscott, MA), only 46 GDDS have accumulated so far.

For the most part, Forsythia has been in full bloom and maybe barely starting to green up. We still find that nine years out of ten, it is better to wait at least until Forsythia reaches that “half green – half gold” stage. Another indicator that has worked pretty well over the past few years has been the Bradford pear. When it is about half white blossoms and half green leaves, this seems to be about the right time to apply an adulticide – in most years.

We have been observing adults on the short grass since late March, and now we are seeing a significant increase of weevil numbers on the short grass. Most recent weevil dissections revealed that that almost 100% of females collected on the fairways or greens have developed eggs. According to this week’s sampling, weevil numbers are steadily increasing, in spite of the fluctuations in temperature.

We are getting very close to the point of adulticide application in many locations, when the following factors come together: adult activity increases, GDD accumulation is near 125-150, and Forsythia or Bradford pear are half-bloom-half-green.

Monitoring of ABW adult activity is critical at this time to pinpoint the best time for adulticides, which have short residual activity. Soap flushes, vacuuming, visual inspections of greens, and checking clipping buckets after greens mowing can be used to detect the peak density of adults. If pitfall traps are installed, pay attention to daily catches to determine the peak. Monitoring adult activity is a great investment of time and effort even if the adulticide application is not in your plans. Peak adult activity can be a reference point for early larvicide application as well. If you plan to apply chlorantraniliprole (AceleprynTM) targeting small larvae feeding inside of the stem, the application should be scheduled 1-2 weeks peak adult activity.

We are seeing an early start for common cranefly activity (Tipula oleracea). During our visits to golf courses this week (April 14 – 15) we have sampled for cranefly larvae, and surprisingly found some pupae and few flying adults (Fig 3). Even though there are still some feeding larvae, it is unusually early for adults to be flying, considering that we observed flight at the beginning of May in 2019 and 2020. Common cranefly is the less studied species, but recently, it has been reported as damaging or as a nuisance throughout the region more often than European cranefly (there are confirmed populations in southeastern, eastern and western Massachusetts, and northern Connecticut). According to recent reports, this species seems to be spreading and the infestations at some locations have intensified in the past few years.

Damage caused by invasive species is often underestimated and misdiagnosed. On the higher cuts (e.g., fairways, lawns, athletic fields), craneflies cause mostly thinning of the grass and some dead patches. This type of damage is very general and is easy to attribute to factors other than craneflies (such as drought, shade, or other insects). On the shorter grass, cranefly damage looks like ball marks, very similar to black cutworm damage (Fig. 1).

We have also been monitoring chinchbug and billbug activity using vacuuming and pitfall traps. This week was the first week that we discovered chinchbugs in our samples. Only a few billlbugs have started showing up in our pitfall traps and vacuuming collections.

Grubs are moving closer to the surface and resuming feeding. Commonly it is not recommended to treat infestations at this stage unless it is absolutely necessary to stop the damage. At this time some of the grubs might quickly transform into the pre-pupa stage, and in this stage they are not affected by insecticides and not likely to cause damage. Secondly, grubs are large and it is hard to control them. The best approach is to schedule a plan of action to manage the 2021 generation of grubs in the summer (unless you are planning to use chlorantraniliprole, which should be applied between mid-April and early June).

Since late March winter cutworms have been spotted at the multiple locations (Fig. 4). Most of the caterpillars were in the last instar, finishing feeding and getting ready for pupation. Winter cutworm is an introduced species with unique cold tolerance. The caterpillars can feed if temperatures get above 40° F. It is an emerging pest in New England and reports of their activity are on the rise. 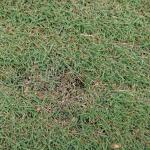 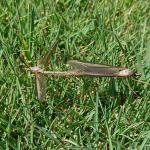 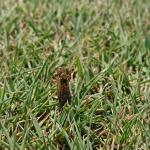 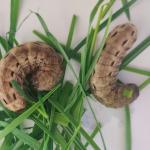