So far, the 2021 annual bluegrass weevil season has been very close to “normal” at most of our sites relative to more than 10 years of ABW population monitoring records (data from Dr. Pat Vittum and Dr. Olga Kostomytska). Comparison of current GDD accumulations and the 10-year average accumulation as of May 20 puts this season as slightly higher than average. Meanwhile precipitation has been lower than normal, and most sites were in “dry” or “moderate drought” status until about a week ago when much of the region received a couple inches of rain.

The ABW activity so far has followed the usual “expected” development, without any major surprises or delays, with the exception that ABW life cycle events occurred slightly earlier than usual this year. Adults started appearing on the close-cut grass in the last week of March or first week of April throughout the region, with the adult activity for most sites peaking around April 20th. About 3-4 weeks after the adult peak, 1st instars were the dominant life stage. Now the larvae are coming out and starting to feed outside of the stem. Only at our coastal site (Swampscott, MA) has GDD accumulation and ABW development been a bit delayed compared to other monitored sites. That is not surprising, since spring often brings sea breezes to the coast and daytime highs can be 10 to 15 degrees cooler than more inland locations.

As of May 20, the average developmental stage for the majority of monitored locations is ~ 2.4. Rhododendron catawbiensis is in full bloom, and GDD accumulations are approaching or have reached 300. This is the ideal time to make late larvicide applications targeting larvae that are coming out of the stem and starting to feed on crowns. If population densities are high, the first signs of damage might become visible, however most damage is expected later, in early to mid-June. The recent rainfall and moderate temperatures have favored grass growth which can mask damage caused by larval feeding.  But we are entering a period where temperatures will be 10 to 15 degrees above normal for at least the next week, so we can expect larvae to develop quickly!

Billbugs are a growing problem, especially in residential lawns. Hot and dry weather in 2020 decreased grass tolerance to billbug larvae feeding and many residential lawns had extensive damage (Fig.1). We have been monitoring billbug activity since Fall 2019 (Fig.2).  We have determined that in western Massachusetts adult numbers normally peak in late May – early June. This year, adult numbers are already steadily increasing, suggesting that we are approaching the peak of adult activity.  Monitoring adult activity is important for two reasons - First, one of the preventive management approaches is to apply adulticides (primarily pyrethroids) during the peak of adult activity. This strategy is not very effective, but at high billbug pressure might be necessary as a first step.  Second, the adult activity serves as a biofix, or event which can be used to estimate and predict larval activity.  For instance, it is expected that 1-2 weeks after adult peak the larvae start feeding inside of the plants, thus it will be good timing to target with systemic insecticides (usually neonicotinoids).

For the common cranefly (Tipula oleracea), one of two invasive craneflies species capable of damaging turf, the first adult flight of the season (Fig. 3) occurred during the last week of April. The second flight usually occurs in early September and most damage is observed in the fall and winter when the second-generation larvae feed.  Not much is currently known about management of common crane flies, however they are reportedly easy to control if the timing is correct.  It is possible that a preventive application targeting grubs with systemic materials (anthranilic diamides during April 15-June 15, or neonicotinoids later in the season during egg laying) might provide sufficient control of the larvae of the spring generation craneflies.  However, possible options for the management of the second generation are unknown.  Studies are being conducted to determine optimal strategies to manage common craneflies in turf. 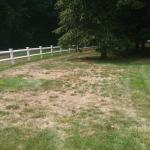 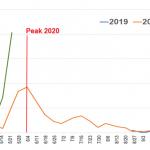 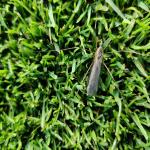