As the days get shorter and the nights get cooler, this is a good time to review some of the insect activity that we saw on turf this past summer. The high temperatures and limited rainfall caused considerable stress to any unirrigated turf – and some of the irrigated turf struggled too! Here are the insect ABCs for the summer of 2020.

We had reports of armyworms (Mythimna unipuncta) (Figure 1) attacking lawns in parts of central Massachusetts in mid to late August. This is the species that is sometimes called the “common” or “true” armyworm. The name derives from their behavior – caterpillars emerge in great densities and move across fields or lawns like an army, eating all of the suitable food in their path. About 20 years ago, we had an outbreak of armyworms in southern New England that caused remarkable levels of damage in many turf areas.

The damage can be sudden and catastrophic. Fortunately, outbreaks on lawns and other managed turf appeared to be sporadic this year, but pastures were not so lucky and several were damaged throughout the state (Figure 2).

Usually armyworms complete two or three generations each year, but the second (or third) generation usually occurs in a new location. That is in part because the turf has been destroyed by a given generation and the new adult females must find new undamaged turf (or pasture) to lay eggs.

Normally by the time the damage is apparent, the caterpillars are too large to control with insecticides. The best bet is to raise the height of cut, water to encourage good root growth (if possible!), and avoid adding additional stresses to the turf.

Several lawns in a town near Amherst experienced serious damage from bluegrass billbugs this summer. As we have mentioned in previous updates, billbug damage often looks like summer dormancy, but as cooler temperatures of early fall arrive, the turf does not respond. This year has brought a bumper crop of billbugs. In most cases, the larvae are already done feeding (the damage has been done), and the new adults are emerging. You can see them moving on the surface or in the thatch of the turf, or wandering across paved areas.

An insecticide will not help at this point. Make a mental note of the areas or properties that have been affected, and plan to take action next spring. (The best approach is to target the adults as they emerge in the spring.) Meanwhile for now raise the height of cut, mow less frequently if possible, encourage deep rooting, and minimize other stresses.

Like billbugs, chinchbug damage often looks like summer dormancy (Figure 3). It turns out that several lawns and other turf areas throughout the state were attacked by chinchbugs this year. Chinchbugs often cause damage in areas that have soils that drain well and/or are in full sunlight, as well as turf that has thick or dense thatch. Chinchbugs can be quite problematic on creeping bentgrass on lawns, because bentgrass at that height of cut tends to be very thatch. Golf course superintendents often notice chinchbug activity along the edges of bunkers, which are often sandier and drain better than other sites.

As with the other insects discussed here, it is too late to do anything about this year’s chinchbugs. Some of them are probably still in the turf, so you can take a look and figure out where the populations are highest, and plan to treat those areas next year. (Mid May to mid June is usually a good time to apply an insecticide targeting the overwintered adults.

White grubs in most areas are in their second or third instar (medium or large size) now. However, some populations may be a little behind “schedule” and grubs may be a little smaller than you would expect. This is because female beetles (e.g., Japanese beetle, oriental beetle, European chafer) often delay egg-laying when the soil is unusually dry, as it was for many of you for much of this summer. So instead of laying eggs in July or early August, some of them didn’t get started on that little project until several weeks later.

Now would be a good time to take some soil samples and see whether you have any grubs feeding. They may still be small enough that you wouldn’t notice the damage, but they should be big enough to see. If you do see large numbers of grubs (the tolerance level is usually between 10 and 15 grubs per square foot, depending on the turf use and the species of grub), you can use a curative treatment of trichlorfon to reduce the population. Remember that trichlorfon cannot be used on school grounds in many of the New England states and New York.

We observed high densities craneflies infestations in the spring this year. The species commonly seen in Massachusetts is common cranefly, Tipula oleracea. This species has two generations per year. The first adult flight we observed in the beginning of the May, and the second adult flight occurred during first two weeks of the September. The emerging adults are laying eggs, which will hatch and larvae will feed and develop into 4th instars by December. Adults of European craneflies, another species reported in the Northeast, fly about the same time, and larvae overwinter as a third instar (we have not observed any European cranefly populations in southern New England yet). Cranefly larvae can continue feeding through winter, causing damage if population densities are high enough. Craneflies prefer wet conditions, therefore high-density populations were commonly seen in 2019 and spring 2020. However, the dry summer and fall in 2020 might negatively affect egg and larval survival (Figure 4). 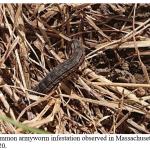 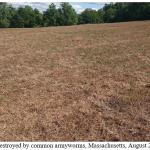 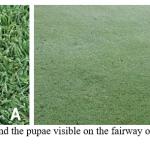