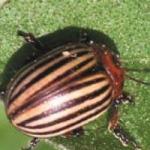 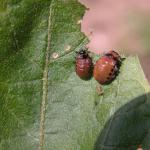 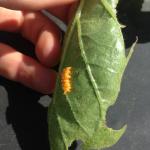 Colorado potato beetle is a key pest of potato and eggplant throughout the Northeast and requires a combination of cultural, biological and chemical strategies for effective control. It is important to understand the life cycle of any pest you are trying to control - for information on Colorado potato beetle identification, life cycle, and crop injury, please see our main Colorado Potato Beetle article.

See scouting sheets for potato and eggplant at the bottom of this page. These can be used for a range of insects and diseases in each crop.

Scout beetles on 30-50 plants (or later in the season, stalks). One recommended procedure is to walk the field in a V-shaped pattern and stop at 10 sites across the field. Randomize your selection of sites using a set number of paces (e.g. stop every 10 paces) depending on field size. At each location, select 3-5 plants if plants are less than 12-18” tall; if plants are larger, select 3-5 stalks. Alternatively, select 30-50 plants or stalks individually at random across the field.

Count adults, large larvae (greater than half-grown) and small larvae (less than half-grown) separately. Take note of the presence of orange-yellow egg masses on undersides of leaves - eggs will hatch into larvae 7-10 days after being laid. Record percent defoliation of each plant/stalk.

A treatment should be considered if the number of adults or larvae or defoliation levels reach one of these thresholds:

A similar process can be used in eggplant. Scout eggplants using the following criteria:

There are no established thresholds for CPB in tomato, as it is not a preferred crop.

Scout weekly. If population pressure may be on the rise, such as when new eggs are hatching or larvae are small, scout again in 3-4 days, especially if numbers are above the following thresholds: 15 adults, 75 small larvae or 30 large larvae per 50 plants/stalks.

Potatoes can tolerate 20% defoliation without reduction in yield (or even more, depending on time of the season and cultivar). Damage by adults in rotated fields may not be significant, so you can wait for egg hatch to kill both adults and larvae. In contrast, damage to eggplant seedlings from adult feeding is often severe enough to warrant control of the adults.

Predators and parasites of CPB suppress populations and help prevent crop injury. Natural enemies that attack CPB eggs or larvae include twelve-spotted ladybeetle (Coleomegilla maculata), spined soldier bug (Podisus maculiventris), a carabid beetle (Lebia grandis), and a parasitic tachinid fly (Myiopharus doryphorae). The fungus Beauvaria bassiana (e.g. Mycotrol) has been shown to suppress beetle populations, though it does not provide immediate control. If insecticides will be used, use selective rather than broad-spectrum products to conserve natural enemies. Be aware that ladybeetle egg masses look very similar to CPB egg masses, though lady beetle eggs are slightly smaller (~1mm) than CPB eggs (~1.7 to 1.8mm) and more yellow in color, where CPB eggs are more orange.

Scout to determine whether or not a damaging population is present. When using products that control only larvae or only small larvae, scout for eggs, note egg hatch and apply controls before larvae reach third instar to avoid the worst feeding injury. For materials that control all stages, you may wait and scout for adults and larvae to determine the need to apply insecticides.

Pesticides are assigned a group number, based on their mode of action. Group numbers can be found on labels and in the New England Vegetable Management Guide. Resistance can develop whenever insecticides with the same mode of action are used multiple times against the same population in the same and succeeding years. Any insecticide used repeatedly on the same population of CPB will lose its efficacy in less than 5 years. For a table of insecticide groups with products registered for use on Colorado potato beetle, please see the attachment at the bottom of this page.

Growers should avoid using pesticides in the same group twice in one year, or even better, once every other year. Newer chemistries should be used first. For conventional growers, there are enough products to keep a two-year rotation that will effectively control CPB while delaying resistance to any one product. For organic growers, there are fewer products available, and cultural control practices should be followed to avoid dependency on a product.

Do not try to kill every beetle in the field. Potato crops can withstand 15-20% defoliation without affecting yields; eggplant can withstand 10% defoliation. In potatoes, avoid spraying the beetle in late season, as food reserves in the foliage two weeks prior to senescence add little to final tuber bulking.

Organic control (OMRI listed). Spinosad and azadiractin are the main options. Beauvaria bassiana (Mycotrol O) has been shown to suppress CPB populations, though it does not provide immediate control. Cultural controls are key to reducing dependence on a limited number of products.

To prevent resistance, alternate among classes of insecticides in each generation, and throughout the season. The following insecticides each have a different mode of action and provide good options for alternate insecticides that provide effective control:

Abamectin (AgriMek 0.15EC, Abba) is mainly a contact material, which controls larvae. It may be best used early in the season, when good coverage is easier to obtain. Rates of 5-6 fl oz per acre gave effective control in commercial fields in trials on Long Island. The lowest labeled rate is 8 fl oz.

Azadiractin (Neemix, Aza-Direct). Insect growth regulator for immature stages of insects including CPB. OMRI listed. Neem products have shown efficacy against CPB in trials and is rated as ‘good’ efficacy in the Ohio Vegetable Production Guide. This may provide an alternative to spinosad for organic growers.

Chlorantraniliprole (Coragen) received a federal label in 2008. A new class of chemistry (group 28) that disrupts the calcium balance of muscles. It can be applied as a foliar (translaminar) or systemic (soil uptake) at planting or transplanting or through drip irrigation. Effective against catperpillars, including difficult ones like beet armyworm, CPB (allstages), and leafminer; labeled in potato, brassicas, leafy greens, cucurbits, fruiting crops, and sweet corn. Active ingredient also known as Rynaxypyr.

Novaluron (Rimon) is a relatively new pesticide chemical belonging to the class of insecticides called insect growth regulators> (IGR). IGRs slowly kill the insects over a period of a few days by disrupting the normal growth and development of immature insects. Novaluron acts as an insecticide mainly by ingestion, but has some contact activity. IGR insecticides are comparatively safer to beneficial insects and environment. Target applications to the beginning of egg hatch when larvae are small. Use higher rates for larger larvae. Does not control adults.

Spinetoram (Radiant 2SC) has the same type of active ingredient and mode of action as spinosad. New liquid formulation. Target small larvae. May be applied with chemigation.

Spinosad (Entrust, OMRI listed; Spintor 2SC is no longer on the market though stocks can be used) gives control of all stages of CPB at a 3.5 to 4.5 fl oz rate. Will also control European corn borer.

Nicotinoid insecticides may be soil or trickle applied (Admire, Platinum, Venom), foliar applied (Actara, Assail, Leverage,Provado, or Venom), or applied to seed pieces (Cruiser, Gaucho MZ). In the Connecticut Valley, there are fields whereCPB resistance to imidacloprid (Admire) is 300 times that of susceptible populations. Control of CPB requires higher rates, does not last as long, or has been lost completely. There is cross-resistance among products in the nicotinoid group. For resistance management, do not use a product in this group on more than one generation per year. A single foliar application is less likely to cause resistance than a soil applied systemic, because it only affects part of the population and only one generation.

In summary: If adults are the predominant stage, the following neonicotinoids are labeled but should not be used if an at planting neonicotinoid was applied: Actara, Assail, Leverage, Provado (imidacloprid), or Venom. These materials should provide control as long as beetles are not resistant to this class of chemistry. Once eggs hatch and larvae are present, the previous materials as well as Avaunt + PBO, Agri-mek (abamectin), Coragen, cryolite, Radiant, Rimon, or Spintor have provided control.