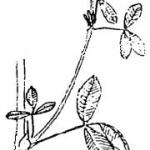 Comes from Asia minor, a semi‐arid region where insufficient moisture is the chief limiting factor to plant growth. With little or no leaching, soils were neutral in reaction and generally well supplied with minerals. The name "alfalfa" comes from the Arabic language, meaning "best forage". Alfalfa was carried across North Africa and southern Europe to Spain, from Spain to the West Coast of South America, and from there to California about 1850.

Stems ‐ Moderately strong, woody, upright stems high in fiber. For this reason and others, alfalfa is chiefly a hay and not a pasture plant. Stems arise from a "crown" or part of the plant close to the soil surface. The crown increases in size each year and may measure 12 inches or more in diameter. As a crop of stems begins to flower, new stems or "shoots" start to grow from the crown. This periodic development of new shoots (every four to six weeks during the growing season) explains why alfalfa is so productive. Two, three and even four crops can be harvested in one season. In the Imperial Valley in southern California, ten crops of alfalfa are harvested in one year.

Leaves ‐ Palatable and nutritious but can be easily lost during drying especially if raked below 40% to 50% moisture.

The soil requirements of alfalfa are exacting. Drainage must be good and high fertility levels must be maintained. A constant supply of available calcium, magnesium, potassium and boron is essential. A pH of 6.5 or above should be maintained.

Alfalfa is plagued with many serious diseases and insect pests in humid regions. Leaf spot diseases are especially serious with first cutting. Several insects including alfalfa weevil, and leafhopper are potentially serious pests.