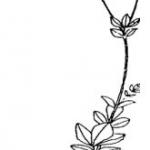 Stems ‐ Relatively small stems arising from a crown semi‐erect or upright in growth habit. There is less fiber than in alfalfa or red clover.

Leaves ‐ Palatable and nutritious. Occur alternately either side of the stem. Each is composed of five leaflets, three apical and two basal resembling stipules.

Adapted to loam soils with good moisture holding capacity, and also to heavy clay soils. It is not adapted to sandy soils. High soil temperatures appear to favor root diseases. Legume of choice where drainage or acidity are a problem. It will tolerate low levels of fertility but is productive only on soils with good fertility.

Birdsfoot trefoil is a slow growing perennial legume adapted to cooler climates. It is slow to establish and being a light loving plant will not withstand much competition at the seedling stage. Successful inoculation is difficult. Birdsfoot trefoil is more tolerant of grazing than alfalfa and red clover, and will normally outlive red clover by several years. Bloat is not a problem with birdsfoot trefoil.