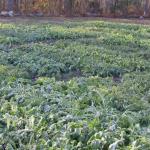 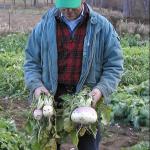 Dairy and livestock producers often purchase a large portion of their animal feed from off-farm sources. In growing feed for livestock, farmers think first of traditional feeds such as corn silage and hay crops. However, there are other non-traditional crops such as certain Brassica species (e.g. fodder kale, fodder rape, swede, and turnip), fodder beet, annual legume forages, and stockpiled grasses, which are seldom if ever grown in the US. Growing these alternative feed crops would allow farmers to extend the grazing season, and be more self sufficient in home-grown feed and fodder, resulting in less off-farm expenditures and potentially greater monetary returns for small and large producers.

Production of Brassica crops for forage production can occur in many locations, including soils where conditions may not be suited for production of alfalfa or corn. These locations are often the most difficult or neglected sites where forage production problems such as soil acidity, low available nutrient content, poor drainage and/or droughty soils, and soils with topographical limitations exist. On hill land and droughty soils the distribution of forage over the growing season is poor, with availability of forage being a serious problem in summer and fall. While sheep, cattle, dairy replacements, and dry cows sometimes graze these fields, many are neglected and some continue to revert to forest.

Use of alternative forage crops could also improve soil fertility and by increasing home-grown forage, will have a positive impact on maintaining environmental quality. Rotating shallow rooted traditional grasses with deeper rooted Brassica species is very effective in enhancing nutrient use efficiency and may reduce the cost of fertilization for farmers. Brassicas have also been used by farmers to renovate run-down or sod-bound pastures and hayfields where conventional tillage is impractical because of rock and stone.

Brassicas are high in dry matter digestibility at 85 to 95% which contrasts with good alfalfa, at 70%. This is significant because the digestible energy of most forage crops is low for high gains and growth in animals. Brassicas increase the availability of certain minerals and are also high in protein. Leaves contain 18 to 25% crude protein, while the root of turnip and swede contains about 10% crude protein. These quality traits are important reasons why these leaf and root crops have been commonly grown in New Zealand and Europe as nutritional fodder for sheep and cattle.

The most promising aspect of Brassica usage is for late summer or fall grazing. Once established, Brassica crops require little attention and can be grazed in situ, or depending on the crop, cut with a forage harvester (green chop) or roots can be lifted. Brassicas retain their nutritive value well into freezing temperatures and can be expected to be grazed in most years as late as the end of December, or even longer in coastal regions of Massachusetts. Forage rape and turnip reach their maximum yields after 90 to 100 days from planting, while swede and kale require 150 to 180 days. Swedes and kale may have a higher yield potential than forage rape and turnip. In a preliminary evaluation of 27 different Brassica crops (Table 1) at the University of Massachusetts Agronomy Research Farm, yield after 92 days of growth ranged from1.8 tons of dry weight per acre for Marrow Stem Kale to 3.7 tons dry weight per acre for Macro Stubble Turnip. The swedes and kales would be expected to yield more with a longer growing period.

Because many of these varieties are superseded or now unavailable three plantings of 16 Brassica crops were grown in 2002 as part of a Speciality Crops grant from USDA through Mass. Dept. of Food and Agriculture. These included kale, rape, swede (rutabaga), and turnip supplied by Ampac Seeds (Appian turnip, Major Plus swede, Winton swede, Kestrel Kale), Barenburg Seeds (American Purple top rutabaga, Barkant turnip, Barnapoli rape, Purple top turnip, Rangi rape, Rangiora rape, Sampson turnip, Seven Top turnip, Tyfon), and Seiger Seeds (Royal Crown, Topper - hybrid turnips). Each was of these 16 Brassicas were planted at 3 locations on June 16 through August 13, 2003. Fresh weight yields are shown in Figure 1. Moisture contents ranged from 84% to 91%. Seeding rates for Brassicas range from 1.5 to 4 lbs/acre, with seed prices ranging from $3.00 to $6.00/lb. Yields ranged from almost 40 ton/acre to less than 10 ton/acre. The low yield of Kestrel kale was because of wildlife grazing preference for this variety, and the general variability in yield reflected the varying locations, little or no fertilizer used, times of planting and dry conditions in the summer of 2002. Considering these factors Brassica forages offer a good alterative for sheep producers to extend the grazing season with low input costs.