The American Veterinary medical Association (AVMA) recognizes that  castration  and dehorning of cattle are important for human and animal safety when cattle are used for  agricultural purposes. Because castration and dehorning cause pain and discomfort, the AVMA recommends the use of procedures and practices that reduce or eliminate these effects, including the use of approved and clinically effective medications whenever possible. Studies indicate that preoperative use of non-steroidal anti-inflammatory agents and local anesthetics reduces pain and distress associated with castration and dehorning. Both dehorning and castration should be done at the earliest age practicable. Disbudding is the preferred method of dehorning calves. Local anesthetic should be used for other dehorning procedures. Elastrator rubber banding techniques have been associated with increased chronic pain and should be discouraged. High tension-banding systems may be used with appropriate veterinary supervision and/or training in those situations where surgical castration may predispose to postsurgical complications. There are a number of acceptable castration techniques utilized by the cattle industry. The castration method used should take into account the animal's age, weight, skill level of the technician, environmental conditions, and facilities available, as well as human and animal safety. Research leading to new or improved techniques that reduce or eliminate pain and distress associated with castration and dehorning, or development of viable alternates to castration and dehorning, is encouraged. 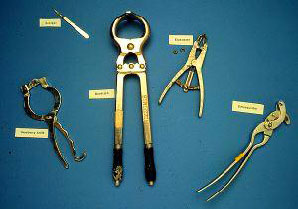 Tail docking is a management practice used within the dairy industry. The dairy industry in New Zealand developed the process during the early 1900s as an attempt to reduce the incidence of leptospirosis in milking personnel. The stated goals of tail docking include improved comfort for milking personnel, enhanced udder cleanliness, reduced incidence of mastitis, and improved milk quality and milk hygiene. In the USA, California has passed legislation banning routine tail docking in dairy cattle and similar actions have been proposed in other states. Current AVMA policy opposes routine tail docking of cattle. The current position of the American Association of Bovine Practitioners (AABP) states that: "The AABP is not aware of sufficient scientific evidence in the literature to support tail docking in cattle. If it is deemed necessary for proper care and management of production animals in certain conditions, veterinarians should counsel clients on proper procedures, benefits, and risks."

Castration is common practice throughout the world. Although castration inflicts pain on the animal and causes a period of slow growth rate and poorer feed efficiency there are benefits as well. Castration reduces aggressiveness and sexual activity by lowering testosterone levels, and modifies carcass characterictics in animals sold for beef. There are several different methods of castration; they can be classified into three major groups:physical, chemical, and hormonal. These groups can be divided further by technique but overall castration is achieved by removing the testicles surgically, damaging them irreparably, or causing them to atrophy by stricture of the blood supply.

Pain associated with the surgical and Burdizzo clamp methods is relatively immediate, whereas pain resulting from elastrator ring/band placement is delayed due to interruption of the blood supply by the band/ring. Three-to 4-week-old calves castrated using rubber rings exhibited no signs of pain at the time of ring placement. In contrast, Burdizzo-castrated calves demonstrated marked signs of pain if not anesthetized, and mild to moderate pain if anesthetized prior to castration. Potential complications associated with castration include hemorrhage, excessive swelling or edema, infection, poor wound healing, and failure. Use of the Burdizzo clamp may be associated with a higher failure rate, most likely caused by operator error.

Risk of hemorrhage is greater after surgical castration and is associated with higher complication rates including bleeding, swelling, infection, and death. Application of local anesthesia prior to castration is mandated in some countries, and significantly reduces the pain response to castration. Castration is considered to be a necessary management practice for cattle. Although younger cattle exhibit less pain, stress, and distress in response to the procedure, all methods of castration induce pain and physiologic stress in animals of all ages. Pain and physiologic stress resulting from castration should be minimized to provide for the overall welfare of the animal. Research results suggest that application of local anesthesia and the administration of analgesics have the potential to minimize or eliminate pain and stress associated with castration. For a visual of equipment used for castration, see Figure 2. 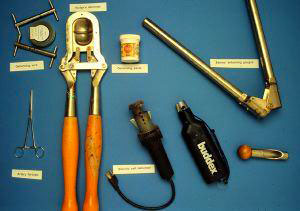 Hot-iron disbudding is commonly performed and is reliable, but it is considered to be quite painful and local anesthetic should always be used with this procedure. Dehorning is removal of the horns after they have formed from the horn bud. Physical methods of dehorning (gouge dehorning) include the use of embryotomy wire, guillotine shears, or dehorning knives, saws, spoons, cups, or tubes. The Barnes-type scoop dehorner is commonly used for physical dehorning. The presence of the cornual diverticulum of the frontal sinus causes surgical dehorning of adult cattle to be more invasive.

Dehorning of adult cattle is associated with increased risks of sinusitis, bleeding, prolonged wound healing, and infection, and should be avoided. Dehorning cattle conveys some advantages. Dehorned cattle require less feeding trough space; are easier and less dangerous to handle and transport; present a lower risk of interference from dominant animals at feeding time; pose a reduced risk of injury to udders, flanks, and eyes of other cattle; present a lower injury risk for handlers; and exhibit fewer aggressive behaviors associated with individual dominance. Minimizing pain associated with disbudding and dehorning is important to limiting the pain-stress-distress cascade that creates altered behavioral and physiologic states.Pre-emptive analgesia can be accomplished with sedation, general anesthesia, local anesthesia, and pre- and postoperative administration of nonsteroidal anti-inflammatory drugs.

Reports of the benefits of tail docking are not currently supported by data in the scientific literature. Tail docking has been experimentally shown to cause minimal adverse physiologic effects; however, fly avoidance behaviors are more frequent in docked cattle, suggesting potential long-term adverse behavioral effects. Increased temperature sensitivity and the presence of neuromas in the tail stub suggest that chronic pain may be associated with the procedure.

Holstein calves have been observed to exhibit increased walking or running behavior, increased head-to-tail movement and licking, and less tail swinging and lying behavior following application of a rubber ring for tail docking. These actions have been interpreted as indicators of distress. The use of local anesthetic at the time of ring application provided no detectable benefit in reducing physiologic signs of stress. Necrotic tissue, such as the distal tail after banding, is prone to infection with pathogens. Clostridial organisms, ubiquitous in soil, may colonize the wound and result in local or systemic infection. Tetanus and gangrene have been reported after tail docking.

The role of the tail in communication between cattle has not been documented, but it has been speculated that tail docking limits the ability of cattle to exhibit normal signaling behavior. In addition, the tail is widely believed to play a role in fly control; shaking the tail and brushing the body and limbs can dislodge biting flies.