Nitrogen (N) management is often a challenge in obtaining an economically optimum yield. This is because many factors influence nitrogen behavior in the soil, including its source, timing, and especially weather condition. A crop displaying dark green growth, late in the growing season, indicates that it has been over fertilized. This can be a problem especially with manure if mineralization has not been taken into account. On the other hand some visual symptoms of nitrogen deficiency late in the season may not always indicate a yield loss. Reliable tests for detecting N content of corn plants can improve profitability and reduce the potential for nitrate contamination of water supplies.
The lower portion of a corn stalk tends to function like a reservoir for nitrate N (NO3-N). During the grain-filling period, corn plants suffering from inadequate N availability tend to remove N from this reservoir as well as from lower leaves. Conversely, when corn plants are over fertilized, nitrate will accumulate in the lower portion of stalks without contributing to a greater yield. This may result in plants that are dark green in color.
Measuring the nitrate concentration in the lower portion of corn stalks, at the end of the growing season can be useful in determining nitrogen deficiency, sufficiency, or excess. Studies over a wide range of conditions have shown remarkably similar relationships between the amount of N found in the lower stalks late in the growing seasons, and the likelihood that corn had been under or over-fertilized (Figure 1). The Cornstalk Nitrate Test (CSNT), by itself or along with pre-sidedress N test (PSNT), can be used to gain confidence in the nutrient management and planning process. In years with a cool and/or wet spring, microbial activity responsible for decomposing organic matter is low. Under this condition, PSNT results may indicate the need for N fertilizer even though sufficient N may still be released from soils’ organic reserves when the temperature rises. The end-of-season cornstalk nitrate test can confirm if fertilizer was needed and help farmers decide on proper N application adjustment for future years. 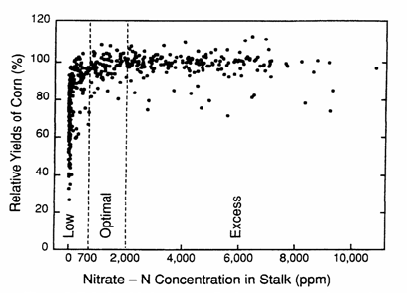 The test requires collecting corn stalks at the end of the season just before harvest. For grain corn, stalk samples should be taken between one and three weeks after there has been a black layer formation on 80% of the kernels.

Remove leaf sheaths from the segments

Place segments in a paper bag (not plastic as it promotes fungal growth) and dry or freeze for later analysis. 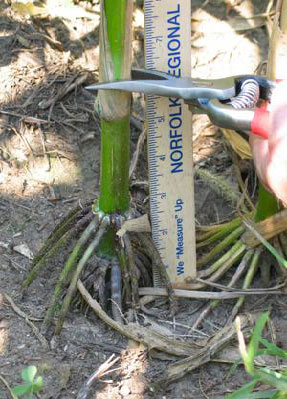 Figure 2. Samples should be taken 6 inches from the soil.

Stalk nitrate concentrations for silage corn can be divided into four categories;

The Low category (<700 ppm): Indicates corn plants could have benefited from higher N fertilizer application. Visual signs of N deficiency usually are clear when nitrate concentrations are in this range.

Indicates that N in the field was in excess of what is needed for optimum economic yields. Not only might this represent an economic loss, but it may also indicate a potential for nitrogen loss to the environment. Nitrogen management should be evaluated to determine why the N supply was excessive and management changed accordingly

Note Measurement of nitrate concentration in the lower portion of corn stalks at the end of the growing season can be used to determine nitrogen deficiency, sufficiency, or excess in corn silage.