Fusarium Head Blight (FHB), also commonly called scab, is a fungal infection of small grains and grasses, particularly wheat and barley. FHB and resulting mycotoxin contamination pose specific challenges for the malt barley producer. FHB can be caused by over 17 species of fungi within the Fusarium genus. The most significant pathogenic species in North America is Fusarium graminearum.There have been severe outbreaks of FHB in the United States in recent decades, with a loss of barley yield of 70 million tons ($122 million in commodity value) in a 1993 outbreak alone. This raw loss of yield does not include the secondary loss in value to producers through shriveled kernels unsuitable for malting, as well as the production of mycotoxins. The mycotoxin of greatest concern is deoxynivalenol (DON), also known as vomitoxin. DON contamination at low levels can cause health effects in humans and livestock, particularly swine. DON presence below the human consumption threshold in malt barley causes challenges in brewing and fermentation, and results in ‘gushing’, rapid loss of beer foam from bottles on opening, in the finished products. The FDA has thus set advisory levels for DON content    (Table 1).

FHB management can prove challenging, particularly for growers using reduced or no-till systems. Fusarium graminearum overwinters saprophytically in the residues of previous crops such as corn and small grains. Crop rotation with non-host species, tillage to reduce primary inoculum and fungicides are the primary methods of control for FHB.

Initial symptoms of FHB consist of the premature bleaching of spikelets with in the head of the barley plant (Figure 1). This begins as brown-tinted water spots at the base of the glume that become noticeable as they become chalky and bleached in appearance. With the continuation of humid conditions favorable to fungal growth spores may form along the base of the glumes, giving them a salmon coloration that is indicative of severe infestation. Partial bleaching of the head and pinkish coloration of the infection site (as asexual spores develop) are distinctive to FHB, making it unlikely to be misdiagnosed by the grower as an unrelated head infestation, such as smut or ergot. While black chaff (Xanthomas spp.) may also cause brown spots on glumes of barley and wheat, it does not result in partial head bleaching, and can also infect leaf tissue. Severity of infestation is best determined in the field through two metrics: incidence and intensity. Disease incidence is determined by counting the percentage of heads out of a hundred with any infestation in a random sample taken throughout a field. Intensity is determined by calculating an average percentage of spikelets infected amongst all the heads counted to determine incidence. A useful visual reference for FHB intensity was developed by Stack and McMullen in 1995 (Figure 2).

F. graminearum is a monocyclic disease, going through only one infection cycle per season. The fungus survives saprophytically on crop residues of host species including barley, wheat, oats, sorghum, triticale, durum, corn, rice and other grasses.The fungus produces sexual ascospores in perithecia, produced on crop residues in the soil. Spores are released through rain splash or wind, infecting barley spikelets through extruded anthers during flowering (anthesis) and through the soft dough stage. Infection is most likely to occur under favorable weather conditions (>90% RH (relative humidity), 59-86°F).

Anthesis is the growth stage when plants are most susceptible, a limited window for severe infection. Following infection, the fungus spreads within the kernel and through the head, clogging the vascular tissues of the plant to produce premature ripening, and shriveling even uninfected kernels due to reduced water and nutrients (Figure 3). In late stage infection, FHB symptoms may not be visible, though the fungus and associated mycotoxins are present. Due to the possibility of wind dispersal, long distance transport of F. graminearum spores is possible.

An integrated management strategy is required for the successful management of FHB. Cultural practices are the first line of defense for a grower against the risk of a FHB infestation in their fields. A primary cultural control is reducing sources of initial inoculum, the sexual spores on crop residue. The most effective methods include tillage to accelerate residue decomposition prior to the planting season, avoiding planting crops adjacent to inoculum sources, crop rotation with non-host species such as pulse or oilseed crops, and staggering planting dates and dates to maturity within the field.

Staggering ensures that only a portion of the crop is undergoing anthesis at any given point, reducing the likelihood that anthesis of a plant will coincide with weather conditions favorable to infection, that is, high RH and temperatures between 59-86°F. Reducing irrigation during the most susceptible developmental windows may also reduce the risk of infection.

Resistant cultivars have proven difficult to develop through barley breeding programs, though there are several varieties of wheat that offer partial resistance to FHB. Biological control research to control FHB and the resulting development of DON is being pursued. While there are no commercially available products at present, some members of the fungal genus Trichoderma have shown promise in the laboratory. Fungicides offer some protection against FHB. Several triazole (group 3) fungicides are approved for use against FHB. The most effective application timing is when 30% of heads are in anthesis. However, the best control to be expected through fungicide use is approximately 50%, and fungicides are not frequently used due to this low efficacy relative to expense. If used, fungicides should be part of an overall management program along with cultural controls and should be timed using disease forecasting models. The Fusarium Head Blight Risk Prediction Center is an online resource available to growers of wheat and barley to determine if and when infection risk is high (see online resources). Harvesting management can also be used to reduce the amount of infected kernels and associated mycotoxins in the harvested crop. Combine settings can be adjusted to blow smaller, lighter, shriveled kernels out with the chaff, reducing the number of severely infested kernels in the crop. Additionally, harvesting infected and uninfected areas separately can preserve higher sale values for higher quality, uninfected grains.

This research was partially funded by two Northeast SARE grants, GNE13-066 and LNE15-340. 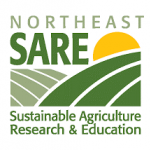 Visual Guide to head diseases of wheat and barley: (http://www.msuextension.org/plantpath/pdfs/headisease.pdf)