In New England, farmers generally rely on tillage to create a warm, dry, and weed-free seedbed. However, tillage makes the soil susceptible to erosion, and contributes to soil compaction, especially when the soil is wet and not well dried. Intensive tillage, lack of surface cover, and insufficient crop residue has played a significant role in soil degradation. In recent years, research by Extension and universities, as well as soil health campaigns by NRCS, have raised awareness and expanded farmer demand for more information pertaining to cover cropping and no-till systems.

Benefits of no-till with cover crop systems include:

Farmers are increasingly adopting no-till management in their cropping systems, and the number of those considering a transition to no-till is fast growing.  However, the transition from conventional to no-till may present some challenges. There are several concerns that farmers need addressed before making their final decision:

Q: Is there a crop yield penalty in either the short or long term?

A: UVM Research has shown a slight yield drag when transitioning continuous corn fields to no-till while the soil improves from the cover crop and the reduced soil disturbance. Some dairy farmers in the Northeast however have not seen a reduction in yield.  UVM research, along with countless farmer experiences, does not show a yield drag when starting no-till corn into hay fields that are terminated in the previous fall with a herbicide. This technique is also a great way to start a crop rotation in fields that have not traditionally been used for corn silage production. In fact, with extreme changes in weather conditions, including longer period of no or little rain, it is expected that corn grown in no-till system will perform better than those planted conventionally.

Q: Should changes be made to fertility management?

A: The short answer is yes. The following list includes tips and considerations for fertility management in no-till systems:

Soil pH can be more difficult to manage. The transition to no-till will be best if the soil pH is already in a desirable range.
Nutrients applied to the soil surface, including lime, may become concentrated in the topsoil. Soil testing of the top two inches of soil, as well as the standard six inch depth, may be useful to identify a build-up. If the nutrient concentration test results from the six-inch deep sample are optimum or high, then nutrient accumulation near the soil surface should not be a concern. If the six inch results indicate low or very low nutrient concentrations and/or the two inch depth indicates high concentrations, then injecting phosphorus and potash with the planter or a separate fertilizer injector is recommended.
Manure cannot be incorporated into soil; if injection is not an option, ammonia nitrogen (potentially up to 50% of the total nitrogen in liquid manure) may be lost to the atmosphere. However, many researchers and farmers believe the benefits of no-till and the use of nitrogen conserving cover crops outweigh the potential nitrogen loss.
Cover crops capture nitrogen from manure and residual nitrogen from the previous season, thus helping to reduce nitrogen inputs to subsequently planted corn.  Even so, most no-till experts recommend applying 30-50 pounds of N per acre as a starter. This would be especially necessary if rye or other winter grain cover crops were terminated at a more mature stage.

A: No specific corn hybrid has been developed to perform better in no-till system. However, two of the integral parts of no-till corn are weed control and cover crops. Cover crops should be an essential part of no-till corn system.  Figure 1 clearly illustrates that no-till systems with cover crops provide much more benefit than adopting no-till management without including cover crops in the rotation. To facilitate cover crop establishment, shorter-season corn hybrids should be selected as they will mature in time to get an effective cover crop established by mid-September. Earlier maturity hybrids do not necessarily mean lower yields.  UMaine, UMass, and UVM corn hybrid trial data has indicated that shorter-season corn does not suffer a significant yield penalty. Proper short-season hybrids can be selected based on their yield and quality performance from annual trials that are published by the above three states. 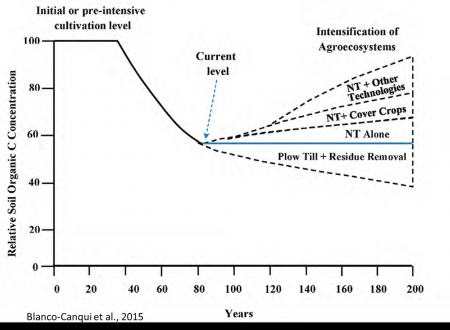 Q) What is it about cover crops that make them so important for no-till to be successful?

A) Cover crop roots break up compaction and create pores that are used by the following corn crop’s roots.  Soil microbes that feed on carbon exuded from the roots, as well as the roots themselves after cover crop termination, produce sticky substances that bind soil particles together into aggregates.  Aggregates are the key to allowing your no-till soil to breathe, infiltrate water and withstand heavy equipment. Some farmers have equated cover crops to “driving on geotextile fabric”. The soil microbes are as important as the rumen microbes in a dairy cow.

Q) How different would be weed management compared to conventional corn system?

A) In general, surface-applied pre-plant or pre-emergence herbicides are recommended to control early-emerging weeds, even if glyphosate-tolerant corn hybrids are used.  Many no-tillers include the residual herbicide with the cover crop burndown.   In general, annual weed pressure is reduced due to the heavy cover crop residue and limited soil disturbance.

There are some initial costs to consider when transitioning to a no-till corn system.   Some growers have modified their existing planters, while others have purchased new no-till planters. Both can be effective, but the key will still be to get the right seed placement. Some guidelines can be found on some You Tube videos from Vermont.

Some key components are row cleaners, and/or wave coulter in front, proper packing wheels, seed firmer, and closing wheels. Additionally, the double disk openers may need to be replaced more frequently. There are cost savings in reduced plowing and harrowing. Using 2016 Pennsylvania custom rates, producers would save about $35 in acre by simply eliminating plowing and harrowing. In recent studies in Maine and Vermont, producers indicated a cost savings of $50 per acre in fuel and labor.

Adjustments you may want to make for transitioning into no-till:

Some other resources for reduced tillage and cover crops are available at:

This project was partially funded by Northeast SARE through Research and Education grant number LNE 15-340. Also, the project financed partially with federal funds from the US Environmental Protection Agency (EPA) to the Massachusetts Department of Environmental Protection (the Department) under a s319 Competitive Grant. The contents do not necessarily reflect the views and policies of the EPA or of the Department, nor does the mention of trade names or commercial products constitute endorsement or recommendation for use.

Last Updated:
August 2016
Back to top