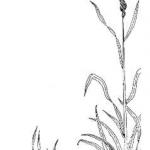 Reed canary grass is an erect long-lived clumpy perennial with coarse rhizomes. It grows 2 to 7 feet tall with leafy stems. Under proper hay and pasture management it makes a dense, close sod. It spreads by rhizomes as well as by seeds. When it mature seeds shatter unevenly from an inflorescence which is a semi-dense panicle 2 to 8 inches long. Reed Canarygrass may become weedy or invasive and in Massachusetts because it may displace desirable vegetation in wetlands it has been placed on the invasive species list. Thus, it is prohibited to buy seed and plant new fields of Reed Canarygrass.

Reed canary grass is a wetland grass that also does well on peat and well drained land. It can be used for pasture, silage or hay as well as for erosion control. It starts growing early in spring and is both summer and winter hardy. Having a long growing season, its forage is palatable and nutritious and will yield 3 to 5 tons per acre. To obtain best forage, the grass should be kept from becoming coarse and from reaching maturity. First grazing should be made before jointing or between early and full head. This latter management will probably require clipping. The cutting for hay should be between the early and full head stage. Second cutting should be based on the appearance of new basal sprouts near the soil surface.