In combination with energy conservation practices, farmers can produce their own energy to become even more self sufficient by reducing external inputs. Not only does renewable energy help the farmer save money but also combats the effects of global warming. Biomass, geothermal, hydroelectric, solar, and wind power can produce electricity for heating, lighting, and fuel for use on the farm. This publication describes and outlines appropriate uses for the renewable energy options mentioned above in a farm setting, as well as providing some information on finding financial incentives for installing and running these systems.

With a little initial investment, energy can be made for free from renewable sources such as the sun, wind, and water. When considering a renewable energy system for your site check with local zoning ordinances before beginning construction. Also keep in mind that any renewable energy electric system on the farm can be connected to the utility grid with an inverter allowing the farmer to receive payment for the power they produce.

According to the Union of Concerned Scientists, “Tripling U.S. use of biomass for energy could provide as much as $20 billion in new income for farmers and rural communities and reduce global warming emissions by the same amount as taking 70 million cars off the road.” Plant and animal derived materials used for energy are known as biomass. Biomass such as sugars and oils from plants can be used to make fuel for vehicles (Biofuel or Biodiesel) and the burning of biomass for heat or electricity is simply called Biopower.

Biofuels are a renewable energy alternative which can be made from crops grown on the farm to fuel vehicles. Some of the controversy surrounding biofuels has to do with using valuable agricultural land to grow energy crops rather than food. To combat this controversy, some farmers choose to grow oil fuel crops such as sunflower, canola, or crambe for the dual purpose of feedstock and biodiesel production. Growing oilseed crops for fuel production on the farm can also be cost effective where after crushing the seed to extract oil, the meal byproduct has a higher market value than the oil itself. While small scale oil presses may be expensive (ranging from $400 to $13,000) some farmers have found a cooperative purchase with other farmers to be effective. Some disadvantages of biodiesel are poor cold weather performance and formation of sediments if stored for long periods. Recycling used vegetable oil from local restaurants is also an option for farmers running their equipment with biofuel. 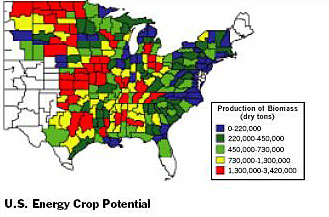 Biopower is electricity produced from steam created by the burning of biomass or burning gas from biodigestors. Biodigestors trap and burn gasses from microbial decomposition of biomass such as manure. While the technology for biodigestors is fairly simple and has been used for many years, safe and clean systems have been designed for use today. Biomass crops such as switchgrass, corn, or fast growing trees can be pelletized and burned for heating buildings such as greenhouses or converted to electricity by way of steam. Some agricultural byproducts such as corn stovers can be used to produce energy without compromising soil quality or increasing erosion. Again, a cooperative purchase of a pelletizer may be sufficient for farmers wishing to burn pellets for heat.  Electricity production from biomass for use by the public generally requires a large scale system owned by utility companies where farmers can sell their biomass products. Transportation costs in areas with smaller farms such as Massachusetts (see Figure 1) will hinder large scale electricity production from biomass, however, on farm production is still feasible.

While many of us think of hot springs and natural hot water as the source for geothermal power, there is a source of geothermal power much more commonly available which is simply the constant ground temperature. Farm buildings and homes can use geothermal heat pumps to exchange air temperature and ground temperature year round, keeping buildings cool in summer and warm in winter. While geothermal systems are more expensive to purchase and install than a typical fossil fuel burning furnace, the payback time is 5-10 years given the free fuel. A geothermal system is best suited for new construction considering the extensive excavation process involved. 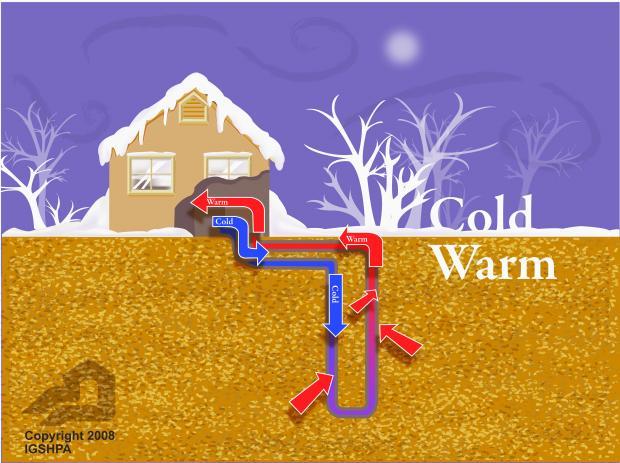 Installing a hydroelectric system on a farm depends greatly on a good source of water with a constant flow. If these conditions exist and the farm’s power needs are well documented, then the farmer may choose from several mechanisms: waterwheels, impulse turbines, or reaction turbines. While waterwheels are less efficient than turbines and are most suitable for powering grinders, they are relatively simple to use and can handle a wide range in water flow and debris. Turbines require a more controlled and constant rate of flow as well as a greater head, or elevation difference from the source of the water to the turbine blades. In general, the larger a hydroelectric system is, the cheaper per kWh. Small hydroelectric systems are a long term investment and 20-25 years is the general lifespan; so plan accordingly.

The sun’s energy can be used for passive heating such as greenhouses, as solar thermal heating for hot water systems, or with photovoltaics (PV) it can be used to convert produce electricity. While photovoltaics are more expensive, technical advancements are making them a cheaper option. PV can be used to power lighting, electric fencing, small motors, fans, pumping water, or charging batteries. In rural areas or sections of the farm away from power lines PV can be the only option.

Passive solar design can be used to heat greenhouses; a cost effective option for small growers interested in extending their growing season. A passive solar greenhouse is highly insulated, uses natural ventilation, and has glass panels angled to collect maximum solar heat depending on the latitude or location of the greenhouse. Solar thermal systems for heating water work in a similar fashion to passive solar by collecting and storing heat. On a dairy farm where up to 40% of the energy used is for water heating, a solar water heater can reduce heating costs up to 85% annually. Like any major appliance, certified and labeled solar heaters are the most reliable. Consult the Solar Rating and Certification Corporation (SRCC) for certification and rating of solar water heaters.

Turbines used to produce electricity from wind can provide a large portion of the average power needs of a farm, however must be located in high wind areas and generally require at least one acre of land to produce enough energy. Farmers or ranchers with grazing land in an area with good wind speeds could also consider leasing their land for wind power production to a utility company while still being able to use their land for their animals. For the option of running a system connected to the grid, the land owner must have an average annual wind speed of at least 10 mph. Installing wind turbines is a long term investment; costing from $13,000 to $40,000 for a residential wind energy system. However, the benefits of a wind turbine can outweigh the costs of installation if local utility costs are high, you chose a turbine that fits the wind speed of your location, and ultimately on how you use and maintain your system.

Keep in mind that a wind turbine can be a good compliment to a photovoltaic system in temperate climates. Wind energy is available when solar energy is not. It is strongest in Fall, Winter, and Spring, as well as at night when hot air rises from the earth’s surface, increasing air flow.

As of December 1st 20009, If you have or will install a renewable energy system in the NSTAR, NGRID, WMECO or Unitil service territories, contact their respective net metering department and apply for net metering as soon as possible. However, Financial incentive programs are frequently changing, therefore the best way to stay up to date with current programs is to check online resources such as the Database of State Incentives for Renewables and Efficiency (DSIRE) regularly.

Growing Energy on the Farm: Biomass and Agriculture Union of Concerned Scientists: http://www.ucsusa.org/clean-energy/increase-renewable-energy/biomass-energy-agriculture#.WPECuVPyui5

Factsheets in this series were prepared by Stephen Herbert, Masoud Hashemi, Carrie Chickering-Sears, and Sarah Weis in collaboration with Jacqui Carlevale and Katie Campbell-Nelson.

This publication has been funded in part by Mass. Dept. of Agricultural Resources in a grant to the Massachusetts Farm Bureau Federation, Inc. by Mass. Dept. of Environmental Protection, s319 Program, USDA-SARE.