Dairy farms face many challenges when it comes to managing manure. The use of earthworms to fully compost manure has been of increasing interest in the dairy industry. Earthworms, more specifically, the Red Wiggler (Eisenia fetida) and the Red Worm (Lumbricus rebellus) are found in areas rich in organic matter, like the topsoil layer or in manure piles. These two species of worms, due to their high tolerance of environmental factors such as temperature, moisture, and pH, and shallow feeding habits, are the desired species for degrading vast amounts of organic materials into vermicompost. Vermicompost is the end product of earthworms’ consumption of organic materials in the form of nutrient rich “castings” and degraded bedding materials. Dairy producers are in an advantageous position to incorporate vermicomposting into their manure handling systems due to the vast amounts of resources available from the farm such as manure and crop residues that can be used as bedding and feedstock for the worms. Vermicomposting can provide a dairy farm with beneficial nutrient soil amendments while also giving the opportunity for added income if worms or castings are sold.

There are several options for vermicomposting systems depending on the scale desired. The key to a productive and successful vermicomposting system is maintaining a healthy living environment that facilitates growth and reproduction of the worms. Several factors such as temperature, bedding materials, moisture, aeration, pH and food content effect productivity.

Earthworms can tolerate conditions that are between 55° to 85° F. However, they best thrive in environments that maintain temperatures between 60° and 70° F. At either extreme, these temperatures will slow down worm production. Vermicomposting is not conducive to extreme temperatures. Temperature can be controlled by adjusting the amount of bedding, adding water (moisture), activating fans near the system or reducing feedstock. In Massachusetts, where weather can be variable from season to season it is advised to have protection from extreme temperatures. This can be achieved by building insulation around the system or using fans to cool.

Worms will consume manures, compost, food scraps, paper, or almost any organic matter. The precise loading rate (at which raw feedstock can be added to a worm bed to encourage the worms to concentrate at or near the surface) will vary depending on the feedstock being used, temperature, moisture levels and the density of the worm population. Proper loading rates require that new feedstock is not added until the majority of the previously added feedstock has been decomposed.
Worms should be feed on a regular schedule. When most of the current feed has been consumed, then it is time to feed again. Just as any living creature, worms need protein to grow. If worms are not growing, add a high protein feedstock like grains, mashes, or cottonseed meal.

Manure feedstocks and bedding should be pre-composted to prevent worm systems from experiencing too much heat. Fresh manures contain a lot of energy that transfers into extra heat when incorporated into the worm systems. High heat in the worm beds can be fatal. Therefore, before using manure as a bedding or feedstock material, it is recommended to semi-compost it for at least 10 to 14 days to retain sufficient nutrition for the worms.

Beds and/or bins- are the most common small-scale system. Bins can be constructed out of several materials such as wood, plastic, or recycled containers like bathtubs and barrels. Bins should be 8 to 12 inches deep. The size will depend on the amount of feedstock and bedding available. As a rule of thumb, provide at least 1 square foot of surface area per pound of feedstock.

Windrows- are linear piles of feedstocks situated on the ground level that are either covered or uncovered. The windrow is started by spreading a layer of organic materials 12 to 18 inches deep. Next, redworms can be added at a rate of up to one pound per square foot. Add feedstock to windrow by layering 2 to 3 inches per week on top of current pile. Pile should not exceed height of 3 feet for the ease of management. Harvest worms with light method.

The wedge system- this system is a modification of the windrow system by adding feedstock to existing windrow at a 45 degree angle. By creating a “wedge” next to the current windrow being used, the redworms will migrate toward the “fresh” pile. Add organic materials to this new pile till it reaches a height of 3 feet then begin a new wedge. Worms will move laterally through the piles. Eventually after 2-6 months, you will be able to harvest the first pile and subsequent piles after.

Continuous-flow reactors are systems with raised beds that have side walls and mesh bottoms with openings that are either 2 inches by 4 inches, or 2 inches by 2 inches. Lay material such as newspaper on the mesh so as to prevent bedding from falling through. Spread about 12 inches of bedding on top of the newspaper. Place redworms on top of the bedding at a rate of ½ to 1 pound per square foot of surface area. Feedstocks are then added in layers on top of the bedding. Vermicompost can be harvested by scraping a thin layer just above the mesh to allow contents to fall into catchment chamber. These systems work best under cover.

Systems should be harvested on average every 30 days to maximize production. There are several options available for harvesting the worms depending on the system utilized. The most commonly used technique for small-scale systems is called the “light method”. Shine a bright light or place the bin near bright sunlight. The light will drive the worms down into the materials so that you can now harvest the top layers carefully. Repeat this process until you have a harvested most all of the worms.

Vermicompost and Its Value

Worms’ excrements are in the form of casts which consist of granules, surrounded by mucus that quickly hardens when exposed to air. These casts are them mixed with the composted worm bedding to create Vermicompost. In ideal growing conditions, worms can consume their own weight in organic matter in one day. Therefore, one ton of worms can consume one ton of organic waste per day. The nutrient content of vermicompost will depend on the type of feedstock and bedding provided for the worms. Vermicompost enhances overall plant growth, suppresses diseases, and increases microbial activity in the soil, while improving physical characteristics of the soil such as water holding capacity, aeration, and porosity, of which all benefit soil fertility. 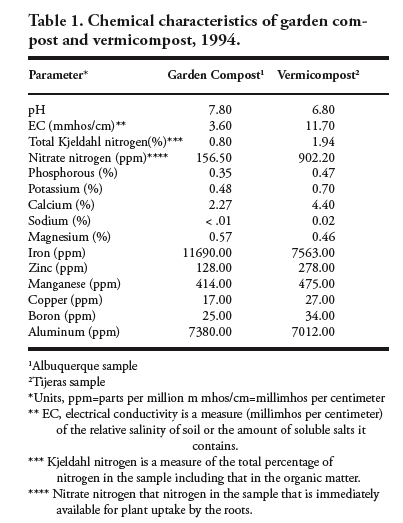 If you are considering setting up an operation, there are a few important questions that you may want to consider:

Check with local and state agencies for zoning or regulations that may need to be addressed such as permits or the need of a business or resale license if you plan to sell vermicompost.

Vermicomposting offers the potential sale of both vermicompost and earthworms. Vermicompost can be sold directly from the farm to gardeners, or wholesaled to garden centers and interested agricultural businesses. Earthworms can be sold to a variety of recipients, such as home vermicomposters, garden centers, fish hatcheries, the bait market, pet stores, poultry producers, educational facilities, and private labs.

Note Vermicompost enhances overall plant growth, suppresses diseases, and increases microbial activity in the soil, while improving physical characteristics of the soil such as water holding capacity, aeration, and porosity, of which all benefit soil fertility.