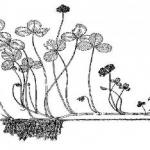 First cultivated in northern Europe. Ladino clover, is a large form of white clover, originated near Lodi in the Po River Valley in northern Italy.

Stems - Main stems trail on the ground surface, but many upright stems or petioles, some bearing leaves and some seed heads, arise at nodes. Stems and leaves are soft and succulent, making white clover and Ladino the most palatable and nutritious of the clovers.

Flower head - Flower heads and flowers are white and smaller than those of red clover.

Adapted only to soil with moderate to good moisture relationships. Ladino clover and New Zealand type white clovers are among the most productive, palatable, and nutritious legumes available, especially for pasture. The most serious problem is animal bloat, hence these clovers must be grazed with caution. Ladino clover is larger leafed and more suited to hay situations when combine with grass than Dutch or common white clover.