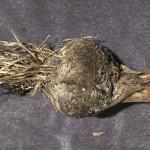 White rot of alliums is caused by the fungus Sclerotium cepivorum (also referred to by the name of its sexual stage, Stromatinia cepivora). This disease is capable of causing significant crop loss in allium growing regions worldwide. It is best controlled by an integrated pest management program that includes cultural, biological, and/or chemical controls.

Typical symptoms of white rot include leaf yellowing and dieback. Plants may be stunted. White fungal mycelium may be present on the basal plate and bulb. Mycelium may be accompanied by roundish, black sclerotia about the size of poppy seeds.

Sclerotium cepivorum is specific to allium species. Sclerotinia sclerotiorum, which causes white mold on several crops including tomato, brassicas, and beans, may also infect alliums but it is far less common in alliums than S. cepivorum.

White rot survives in soil in the form of sclerotia, which are dense masses of fungal tissue. Sclerotia of white rot are black and approximately the size of poppy seeds. They may remain viable in soil for 15 years or more without allium hosts. Sulfur compounds in allium root exudates stimulate germination of sclerotia once soils are warm enough in the spring. Sclerotia germinate at 48-70°F with an optimum of 57-64°F, and the fungus invades the root system and progresses into the basal plate and bulb. Fungal mycelium can travel quite far in the soil—germinating sclerotia buried as deep as 30 cm below the basal plate of an allium crop may successfully cause infection. White mycelium may develop on the basal plate and bulb as disease develops. Eventually, the mycelium is replaced by sclerotial masses. Secondary fungi often colonize tissue infested by S. cepivorum.

Development of this fungus is favored by wet, cool soil conditions; mycelial growth in the field ceases at temperatures above 75°F. The depth at which sclerotia are buried in soil will have some bearing on the temperature they are exposed to and therefore an effect on disease development.
The pathogen is spread by contaminated soil and infested bulb sets and cloves. It can also spread from root to root, causing symptoms in the field to appear in clusters. It is sometimes a post-harvest issue, particularly when storage temperatures are low and humidity is high.

Currently, there is no way to eradicate white rot from a field where it has become established. Some varieties of allium crops may be less susceptible to white rot than others but no truly resistant varieties exist. Therefore, the best way to manage this disease is to avoid introducing it into your fields.

See the New England Vegetable Management Guide for a list of fungicides registered for white rot of alliums.