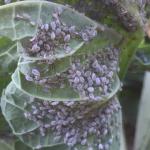 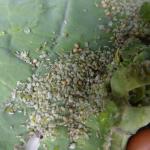 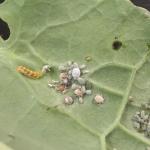 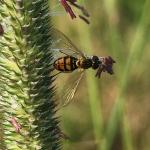 Cabbage aphids are gray-green but usually appear gray or white due to a dusty, waxy secretion that covers their bodies. Earlier instars of cabbage aphid nymphs may lack this waxy coating and appear brighter green. Both adults and nymphs have dark heads and short cornicles, and are found only on brassicas. Winged adults have dark legs.

In New England, cabbage aphids reproduce both sexually and asexually. Eggs are laid on the undersides of brassica leaves in the fall, where they overwinter and hatch out in early spring (~April). Cabbage aphids may also overwinter as nymphs in protected structures (high or low tunnels, or heated greenhouses). In the spring, nymphs develop into winged females that are wind-dispersed into fields, where they reproduce asexually, without mating. Because they are blown in on wind currents, initial field infestations are often patchy and random, compared to other insects that may move in from field edges or other source locations in a more well-dispersed pattern. Colonies of wingless aphids will develop on brassica leaves, and when a colony becomes large enough, more winged aphids will be produced, and will again be dispersed by wind to find new host plants. Throughout the spring and summer, only female cabbage aphids are produced. In the fall, both males and egg-laying females develop. There are multiple generations each summer, and populations can quickly explode, especially in late-summer and fall on long-season crops like Brussels sprouts. Research has shown that cabbage aphid populations can grow more quickly at cooler temperatures. Reproduction rates are highest at 50-68°F, and the development of nymphs stops when temperatures reach 95°F. Therefore, this pest is most damaging to long-season, fall crops.

Cabbage aphids are pests only of brassicas, with cabbage, cauliflower, broccoli, and Brussels sprouts being most severely affected. Populations can fluctuate year to year—infestation rates can be damagingly high one year and almost zero in the subsequent year—possibly due to environmental factors, including rain, which can wash off the loosely attached aphids, and entomopathogenic fungi that attack the aphids and are more prevalent in wet conditions.

Cabbage aphids prefer to feed on young leaves, flower buds, or seed stalks in the upper part of the plant and also feed in developing Brussels sprout buds. Feeding injury includes wrinkled and downward-curling leaves, yellow leaves, and reduced growth. Contamination of marketable parts of the plant with aphids is frequently the biggest problem, as is contamination of the plant with aphid honeydew. (a sugary, sticky secretion produced by the aphids). Cabbage aphids can also transmit cauliflower mosaic and cabbage ring spot virus, among other viruses; transmission is non-persistent, with virus particles passed to new plants by probing.

For successful chemical control of cabbage aphid, treatment must begin early, before infestations become severe. Scout weekly, starting before harvested portions of the crop begin to develop. In the past, the first winged aphids have been seen in brassica fields by June 1, though populations do not seem to reach outbreak levels until late-summer. Treat when >10% of plants have at least 1 aphid, or scout 10 leaves at 10 sites for 100 leaves per field and treat if >20% have aphids. Use lower thresholds when harvestable portions of the crop have started developing. Check old and new growth.

Chemical control of cabbage aphids must begin early, before infestations become severe, and treatments must be applied regularly in order to be effective. Use selective products when controlling other brassica pests to conserve beneficial insects, including predators and parasitoids of cabbage aphid (e.g. use Bt products to control caterpillar pests). See the Biological Control section, below, for more information.

If cabbage aphids are a consistent problem on your farm, systemic insecticides used at planting or sidedress may eliminate early infestations. Scout weekly to determine % infested plants, starting before harvested portions of the plant form. Treat if >10% of the plants are infested with aphids, especially after heads or sprouts begin to form. Or select 10 leaves at 10 sites for 100 leaves per field, and treat if >20% have aphids. Spray coverage of all leaf surfaces, buds, and new growth is key. Good coverage is essential for controlling cabbage aphids, as they like to form colonies on undersides of leaves and within growing tips and buds. Always use a spreader/sticker when spraying brassicas so that the material(s) don’t bead up and roll off of the waxy leaves. Use drop nozzles or directed nozzles, and use high pressure and volume. Hollow cone nozzles can improve coverage of undersides of leaves. Increasing plant spacing can also improve spray coverage.Waiting until there are heavy outbreaks or until just before harvest makes it hard to prevent loss of marketable yield.

Effective OMRI-approved materials include azadirachtin, oils, and soaps. M-Pede has not been shown to be effective when used alone, but M-Pede rotated weekly with azadirachtin provided significant control when applied early and regularly in one study. Azadiractin, horticultural oil and insecticidal soap can be used together—the combination is more effective than either one alone.

Effective conventional products include pyrethroids, organophosphates and neonicotinoids, as well as more selective materials like flonicamid (Beleaf) and pymetrozine (Fulfill). Spirotetramat (Movento), although expensive and not broadly labeled, is a highly effective material with some systemic activity from foliar applications. Use a penetrating surfactant with this material. Fulfill, Beleaf, and Movento all have helpful translaminar or systemic activity. Cyantraniliprole products, which are commonly used for caterpillar control in brassicas, are also fairly effective against aphids in general. Resistance can develop among cabbage populations—rotate between IRAC groups and always follow the label.

There are several natural enemies of cabbage aphids, including lady bugs and syrphid fly larvae and the parasitic wasp Diaretiella rapae. D. rapae lays its eggs within cabbage aphids and the resulting larvae feeds on the aphid from the inside, producing a bronze-colored aphid "mummy", which can commonly be seen amongst aphid colonies. These natural enemies can suppress cabbage aphid populations, but may not be able to prevent high densities that can occur in cool fall weather. In 2018 and 2019, the UMass Vegetable Program conducted trials to determine flower preferences of syrphid flies and the cabbage aphid parasitoid D. rapae. Of the flowers evaluated, alyssum (Lobularia maritima syn. Alyssum maritimum), dill, cilantro, and Ammi majus attracted the highest number and the most diverse populations of syrphid flies. Although alyssum was very attractive to many beneficial insects and produced flowers well into the fall, it is also in the brassica family and therefore attracted lots of flea beetles. Dill and cilantro flowers were more short-lived but are possibly an easy insectary planting option for growers who already grow these crops. Click here to see the full report on Attracting Beneficial Insects to Reduce Cabbage Aphid Population Size.

In general, aphid predators are better at controlling high aphid populations, compared to parasitoids, as they are not as efficient at finding low numbers of aphids within the crop.

Ladybeetles are effective at controlling high aphid populations but are highly dispersive and will leave the tunnel in search of food if aphid populations are too low. They can be effective if released under row cover in winter greens. Adults and larvae feed on a wide variety of aphid species.

Predatory midges (Aphidoletes aphidimyza) are another generalist aphid predator that can be purchased and released in your tunnel. They are active in summer months but when day lengths shortens to less than 15 hours (September-March), they enter diapause and become inactive. Larvae feed on aphids and adults feed on pollen and aphid honeydew. Banker plants used to support Aphidius colemani will also support Aphidoletes midges. The midges pupate in the soil, so place banker plants in a tray with moist sand to provide pupation sites if your tunnel has plastic mulch and weed mat.

Green lacewing larvae also feed on many aphid species. Adults feed on pollen and nectar. Lacewings can be purchased as eggs or larvae; larvae tend to survive better than eggs. Release far apart from each other, as larvae are cannibalistic. In summer months, if temperatures rise above 95°F, lacewings will move out of the tunnel. Lacewing activity and life cycle slows as temperature drops, but one report from Purdue University reported that adults remained active and laying eggs at 52°F.