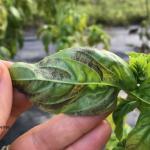 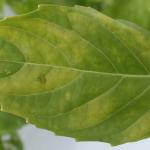 Downy mildew is caused by the oomycete Peronospora belbahrii. The disease was first reported on basil in Uganda in 1930, but did not attract international attention until it appeared in several new locations; Italy (2003), France (2004) South Africa (2005), Iran (2006) United States (Florida, 2007) and Argentina (2008). During 2008 and 2009, the disease occurred throughout the east coast in epidemic proportions both in the field and in greenhouses. Considerable economic losses occurred in Massachusetts during that time and we anticipate basil downy mildew will be a major disease of basil in the US in the foreseeable future.

It is an obligate parasite, meaning that it cannot survive outside of a living host. It does not produce overwintering oospores, but survives from year to year on living plants where basil production occurs year round, such as in Florida. From these sites the pathogen spreads via wind-dispersed sporangia that can travel great distances due to their dark pigmentation, which protects them from UV radiation. There is also evidence that the disease can be spread by contaminated seed, though we do not yet understand how this occurs and how important contaminated seed is as a source of primary inoculum. Long distance transport from FL to MA might be explained by aerial dispersal of spores but rapid transcontinental transport probably occurred via infested seed sold internationally. Air-borne dissemination from infected plants is more likely.

Purchase seed or transplants from reliable sources. We know that the pathogen may come in with seed, though the frequency and importance of seed as a source of primary inoculum are not well understood, and testing of seed is difficult. Therefore, our recommendation is to buy seed from a trusted source. Talk to your seed supplier about how the seed was produced, if it has been tested, and also if the variety exhibits any resistance to the pathogen. Basil seeds are not amenable to hot water seed treatment as they produce a gelatinous exudate when in water, though some seed companies are starting to use steam seed treatment.

Grow your own transplants and keep a careful eye on them. Basil DM has repeatedly been traced back to transplants grown out of state so buying in transplants should be avoided. If you do buy transplants, inspect them carefully before purchasing and if you find any signs of disease report it to the store manager or call your local Extension service. Inspect plants regularly by looking on the undersides of leaves for sporulation (see leaf photos).

Plan to plant and harvest early. The pathogen tends to arrive in MA around mid-July, though in some years it can be earlier. Keep track of where the disease is being found via Pest Alerts in Veg Notes and via the basil downy mildew monitoring program here: https://basil.agpestmonitor.org/map/.

Excellent control of downy mildew can be achieved with conventional fungicides applied weekly on a preventive schedule, but control is greatly reduced when applications are started after disease detection. If the symptoms are widespread and severe, destroy the crop immediately to stop spread of the disease to other plantings on your farm.

Pay close attention to labels. Basil is a minor crop and is not always found on pesticide labels, and there are differences in registrations for use in field versus greenhouse production. Some products have supplemental labels for use on basil. Labels, including supplemental labels, can be found at www.cdms.net/Label-Database.

Research trials have shown that the phosphite fungicides (eg. K-Phite, Prophyt, Fungi-phite) are among the most effective 7 chemical controls. Other effective materials include mandipropamid (eg. Revus), cyazofamid (eg. Ranman), and azoxystrobin (eg. Quadris). All of these except Quadris can be used in both field and greenhouse in MA—Quadris is labeled for field use only.

Fungicides with targeted activity are prone to resistance development due to their single-site mode of action and thus need to be used within a fungicide resistance management program. Resistance to mefenoxam (Ridomil) developed quickly in Israel demonstrating the capacity of this pathogen to develop resistance. See here for example fungicide programs.

While several OMRI-listed products are labeled for downy mildew on basil or herbs, none have been found to be effective in controlling the disease. Cornell’s results from evaluations of several of these products (as well as conventional products) can be found here.