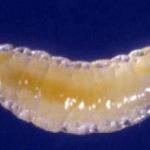 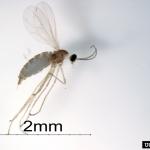 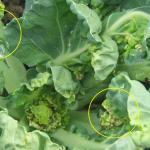 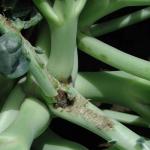 Swede midge is a pest of brassica crops that is relatively new to the Northeast. It is native to Europe and southwestern Asia and was first discovered in North America in 2000 in Ontario. Since then, it has spread south into the northeastern US. It is now widespread in New York state, is established in northwestern Vermont, and has been reported in other New England states.

In addition to the summary below, the Swede Midge Information Center for the U.S., maintained by Cornell University, has extensive information on this pest, including many more pictures of symptoms.

Swede midges are small (1.5 to 2 mm), brown flies. They overwinter as pupae in the top 1 to 5 cm of soil. Adults emerge in spring, mate, and females look for suitable brassica hosts on which to lay eggs. Adults are weak fliers and can travel only short distances on their own, but can easily be blown on even light winds. There are multiple generations per year and adults are present throughout the growing season, beginning in mid-May and continuing in some capacity through late-September or early-October. Eggs are laid in clusters of up to 50, within the growing points of brassicas. Eggs hatch within a few days and larvae feed on the growing tip of the host plant until maturity, when they fling themselves off of host leaves to pupate in the soil. Eggs are tiny—0.3 mm long—and translucent initially, becoming white over time. Larvae are also initially translucent and become yellow as they mature, with full-grown larvae 3 to 4 mm long. The full life cycle of a swede midge can take from 7 to 21 days, depending on temperature and soil moisture levels; the ideal temperature for development is between 66 and 77°F. Of all brassica crops, broccoli, cauliflower, kohlrabi, and collards are the most susceptible; cabbage and kale show moderate susceptibility, and Brussels sprouts, turnips, and non-waxy brassica greens like bok choi and mustards show low susceptibility.

Swede midge larvae are the only stage that cause damage to crops. Larvae feed on the growing tips of brassicas, causing distortion and scarring. Larvae secrete a substance that destroys plant cell walls, causing the cell contents to leak out. The larvae then feed on the cell contents. Feeding damage produces malformed plants with brown corky tissue, galls, no-heads (also called “blind” heads, multiple heads, and twisted leaf petioles. Damage will occur earliest in fields that had infested fall brassicas, especially if that crop was not tilled under before larvae entered the soil to pupate in late-September to early-October. Because swede midge can be blown on winds, early spring infestations may also occur in fields downwind of fall infestations. Infestations often begin along protected edges of fields near tree lines, where the adults are sheltered from the wind.

Symptoms of swede midge can be caused by other factors, including herbicide injury or feeding damage from other pests, so confirming their presence is important. If you see the symptoms described above, use a 10x or 20x hand lens to search within the growing tip of several plants to look for swede midge larvae. A wet growing tip is a good indicator that you will find larvae; infested growing tips tend to be wet due to the burst cells. You can also remove the growing tip from a plant and submerge it in rubbing alcohol. This will cause any larvae present to emerge.

Pheromone lures are commercially available and can be used to monitor for swede midge adults in your field. Monitoring with traps can be useful because by the time you see damage to your crop the midges are probably already gone. That said, there are many different species of midge flies out there, and it is difficult to positively ID swede midge in the field. New occurrences of swede midge in locations where it has previously not been reported need to be reported and confirmed by a qualified taxonomist, so if you’d like to monitor for swede midge on your farm using pheromone traps, let Extension know and we can help you out (contact us at umassveg@umass.edu or (413) 577-3976. Place traps on a stake within the crop canopy, check weekly, and replace when it fills up or gets covered in dirt or residue. Lures are effective for 4 weeks. Use 3-4 traps per field, at least 50 feet apart. For ordering information, see here: http://web.entomology.cornell.edu/shelton/swede-midge/monitoringtraps.html.

Although it can be difficult to completely eradicate a swede midge population once it is established, it is possible to reduce pest damage considerably using cultural controls.

Larvae are difficult to target with contact pesticides as they are concentrated in the protected growing tip, so systemic products are the most effective, although few are currently labeled for swede midge. Labeled products include acetamiprid (Assail) and spirotetramat (Movento). It is recommended to use a spreader-sticker type adjuvant when spraying waxy brassicas unless the label indicates differently. Monitor crops routinely and start treatment as soon as symptoms develop or adults are captured.

A limited number of efficacy trials of OMRI-approved pesticides for swede midge control have shown that weekly applications of kaolin clay (Surround) starting immediately after transplanting and continuing until head formation is effective under moderate pest pressure. Other OMRI-approved products have shown variable efficacy in various years and at various pest pressures. Spinosad and azadirachtin products show some promise but do not provide complete or consistent control.