Carrot acreage is on the rise in New England, as more growers target expanding, year-round markets. Carrots can be affected by many bacteria, fungi and nematodes in the field and in storage. Foliar diseases may cause lower yields due to loss of photosynthetic area, difficulty in harvest if the tops are weakened, and lower marketability if the carrots cannot be sold in bunches. Root diseases can lower yields of fresh eating carrots and can spread in storage, drastically reducing yields brought to later markets. Root diseases are caused by soil dwelling organisms and therefore their incidence may vary considerably from farm to farm. Proper disease identification will help you to prevent future outbreaks by adjusting crop rotations accordingly, and prevent moving infested soil from field to field. Some of the major carrot disease symptoms are described below. If you are noticing foliar or root symptoms like those described, send a sample to your state diagnostic lab to confirm, and take steps to protect current and future crops. See the UMass Diagnostic Lab website for their sample submission instructions.

Symptoms of Alternaria leaf blight first appear along leaflet margins as greenish-brown, water-soaked lesions which enlarge, turn brown to black, and often develop a yellow halo. Older leaves are more susceptible to infection. When about 40% of the leaf is infected, the leaf yellows, collapses, and dies. Petiole lesions are common, elongate, and can quickly kill entire leaves. A. radicina causes similar foliar symptoms but can also produce a dry, mealy, black decay known as black rot on carrot roots held in storage. 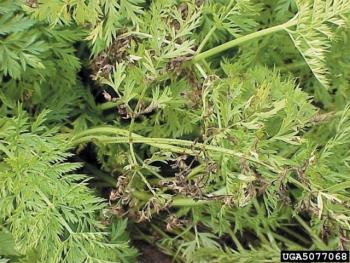 Symptoms of bacterial leaf blight appear primarily on leaf margins as small, yellow, angular leaf spots which expand, turn brown to black with a yellow halo, and become dry and brittle.
Leaflets may become distorted and curled. Symptoms can extend into petioles, produce a yellow-brown, gummy exudate, and occur on flower stalks. Infected umbels can be completely blighted and seed infection can occur—use treated seed to prevent introducing this disease.

Root knot nematode forms galls or root thickenings of various sizes and shapes. Growth of infected carrots is patchy and uneven and severely infected carrots exhibit forking, galls, hairiness, and stubby roots. When soil populations of M. hapla are high, symptoms include stunted plants, uneven stands, premature leaf death, and branches and swellings on both lateral and tap roots. Marketable yield is reduced by deformities, size reduction, branches, and knobs. M. hapla persists in the soil and has a very wide host range so rotation can be difficult, but monocots are non-hosts so small grains and corn as well as resistant varieties of tomato and bean can be grown in rotations to reduce population size. 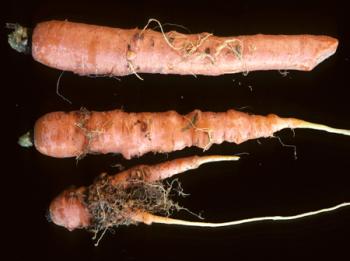 Black root rot occurs primarily in storage when conditions are not ideal and temperature and humidity are too high. The fungus causes superficial, irregular black lesions which occur in a random pattern. The discoloration, caused by masses of dark brown to black chlamydospores, is limited to the skin. The pathogen rapidly invades wounded tissue and is favored by long post-harvest periods without cooling so careful harvest and immediate cooling and storage (<41°F) can minimize disease impact. 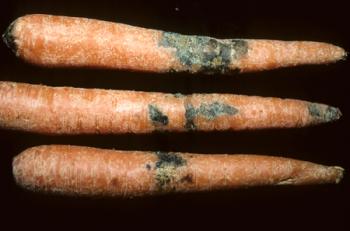 White mold affects many vegetable crops but carrots are particularly susceptible, especially late in the season and during storage. The fungus may be present in soil, storage areas, or containers. Symptoms include characteristic white mycelial growth and hard, black sclerotia (overwintering structures), which can be seen on the crown of infected carrots. In storage, the disease is characterized by a soft, watery rot with fluffy white mycelia and black sclerotia present. Sclerotia can persist in soil for many years and the fungus has a very wide host range making this disease difficult to manage. Grasses and onions are non-hosts that can be used in long rotations and a commercially available biocontrol organism (trade name Contans) has been shown to be effective in parasitizing overwintering sclerotia. Contans should be incorporated into infested soils in the fall if a susceptible crop must be planted there next year. 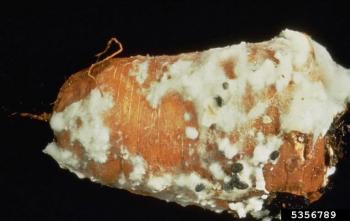 Infections from Pythium spp. can occur during early root development and are favored by moist soil conditions. Root dieback symptoms appear as rusty-brown lateral root formation, or forking and stunting; symptoms that can be easily confused with damage from nematodes, soil compaction or soil drainage problems. Cavity spot often shows up later in the season near harvest. Horizontal, sunken lesions varying in size from 1 to 10 mm appear on the surface of the root and can provide an ingress for secondary fungal or bacterial infections. 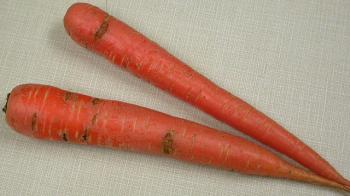 Early symptoms of crown rot are horizontal dark brown lesions around the root crown. As the crop matures the tops may die in patches in the field and as the disease progresses lesions join to form large, deep, rotten areas on the top part of the root. R. carotae can also cause crater rot and violet root rot but these diseases are less common in MA. Crown rot is favored by moist conditions, so planting on ridges, harvesting early and without wounding, cleaning equipment, and maintaining clean and proper storage conditions may minimize impact.

Scab can cause both raised and sunken, dry, corky lesions on the carrot root, however, symptoms are rarely severe enough to cause major losses in yield or crop marketability. Avoid planting carrots in alkaline soils, which are known to favor the incidence of scab, or in potato fields with high incidence of scab, as the disease may be caused by the same organism in carrots.

is a common disease in storage where it infects roots that were previously wounded or diseased. It occurs in the field only rarely, under extremely wet soil conditions. Symptoms start as small, water-soaked lesions that quickly spread and cause affected areas to become mushy, though the skin may remain intact over the liquefied flesh underneath. To avoid problems in storage, avoid wounding carrots during harvest and washing and maintain proper storage conditions.

To avoid losses in storage, try to achieve optimum storage conditions of 32-34°F (essential to minimize decay and sprouting during storage) and high relative humidity (required to prevent desiccation and loss of crispness). Mature topped carrots can be stored for 7-9 months at 32°F with 98-100% RH. Those ideal conditions are difficult to achieve and topped carrots are often successfully stored for 5-6 months at 32-41°F with 90-95% RH. Prompt cooling of harvested carrots to below 41°F also helps maintain crispiness. Carrots produce very little ethylene (a byproduct of respiration) themselves but are sensitive to ethylene produced by other crops in storage and exposure causes production of the bitter compound isocoumarin, which is concentrated in the peel—peeled carrots are not affected. Unless outside temperatures are very low or very high, ventilation is an inexpensive method of reducing ethylene levels. Ethylene can also be absorbed on commercially available potassium permanganate pellets.