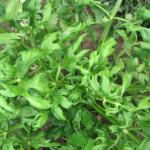 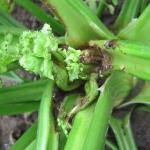 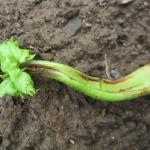 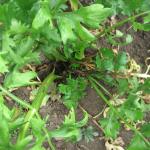 Once uncommon, anthracnose has become an important disease of celery in the past decade. It has been reported in most major celery growing areas worldwide, including Japan, Australia, and the USA.

The fungus that causes celery anthracnose in the USA was first identified as Colletotrichum acutatum. It is now understood that it is not C. acutatum, but C. fioriniae and C. nyphaeae that are both capable of causing the disease. C. fioriniae also causes bitter rot in apples and has also been reported as the agent of anthracnose on scapes of elephant garlic. C. nymphaeae causes anthracnose of strawberries.

Recent research indicates that the celery anthracnose pathogens are seedborne. Survival of C. fiorinae and C. nymphaeae in soil is currently not well understood, but it is likely that these species do survive in infected plant debris.

Infection and disease development is most common and severe in warm, wet conditions, when celery leaves remain wet for long periods of time. Spore germination and infection can occur when leaf wetness duration is <12 hours and temperatures are 59-76°F, but disease is most severe when the leaf wetness duration is >48 hours at temperatures of 77-86°F. In ideal conditions, symptoms may appear as little as 3-5 days after infection; however, infections may also remain asymptomatic for some time, until conditions become favorable for the pathogen.

Spores are spread primarily by splashing rain or irrigation water. The disease can continue to spread through the crop as long as environmental conditions are conducive to spore development and infection.

Many of the fungicides labeled for early blight (Cercospora) and late blight (Septoria) of celery may provide some protection against anthracnose. As of 2018, research was showing that strobilurin fungicides (FRAC Group 11) were most effective in preventing and controlling the disease. Group 11 fungicides should always be used in rotation with non-group 11 fungicides to deal with resistance build up. For up to date information on labeled fungicides, please see the New England Vegetable Management Guide.