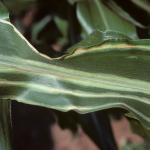 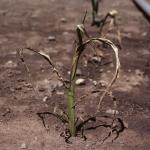 Stewart's Wilt of sweet corn, caused by Pantoea (Erwinia) stewartii, continues to be a problem in most sweet corn producing areas of the Northeast. The disease is caused by a bacterium that can spread systemically throughout the plant. Symptoms appear at any stage of plant growth. Severity of Stewart’s Wilt depends on three factors: 1) the winter temperatures prior to planting 2) the amount of disease the previous season and 3) cultivar susceptibility. If cold winter temperatures occur, fewer flea beetles survive to transmit the disease. The amount of disease in the previous season determines the percentage of emerging beetles carrying the bacterium.

Two phases of Stewart's bacterial wilt occur. The first phase affects seedlings, which become systemically infected and rapidly wilt. Systemic infections occur at or before the 5-leaf stage. The seedling may develop linear pale green to yellow streaks, wilts, and dies. The second (leaf blight) phase of Stewart’s Wilt occurs when older plants are infected. Long, white to yellow streaks develop along leaves and entire leaves may dry up and die, suggesting drought or nutritional stress. Highly susceptible varieties may exhibit vascular discoloration in stems and at leaf nodes.

P. stewartii overwinters in the alimentary tract of adult corn fleas beetles, not in the soil or in plant debris. The beetles hibernate as adults and in the spring feed on corn and other grasses allowing the bacteria to enter the plant. Seedling wilt occurs at or before the 5-leaf stage as the bacterium enters the plant, spreads to the developing stalk, and kills the growing point.

Use insecticides to control flea beetles, particularly on susceptible varieties in the seedling stage. This is not as effective as resistant varieties, but reduces losses where susceptible hybrids must be planted.(Gaucho) seed treatments provide systemic control of corn flea beetles and reduce the severity of Stewart’s Wilt.