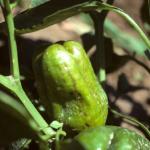 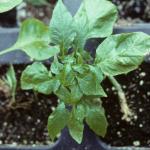 Cucumber Mosaic Virus (CMV) can cause severe losses in vegetables, legumes, and ornamentals. The virus is distributed worldwide but is particularly prevalent in temperate regions. It has a host range of more than 1,200 species, and is transmitted by many species of aphids, as well as cucumber beetles. Vegetable hosts include carrot, celery, cucurbits, legumes, lettuce, onion, pepper, spinach, tomato, and rarely potato. Many woody and non-woody ornamentals are also hosts.

The most easily identified symptom of CMV in celery is a downward curling of young petioles, which gives plants and opened or flattened look. Leaves may develop vein-clearing and mosaic, and interveinal areas may become dark green and thick, making leaves look crinkled. Symptoms are often transient, becoming more and less obvious as the season and weather progress. Plants that are infected with CMV when they are young may develop elongated brown to translucent sunken spots on their petioles.

Symptoms of CMV in cucurbits generally manifest as severe stunting, prominent yellow foliar mosaic, plant and leaf malformation, and stunting due to drastic reduction of leaf size and stem internodes. When the virus becomes systemic, leaves prominently curl downward, develop a mosaic pattern, and remain small. Flowers develop abnormalities and have greenish petals. Foliar and flower symptom intensity varies with species and cultivar: symptoms are most severe in summer squash, some pumpkins, and many melons and less severe in cucumber, winter squash, and watermelon. Infected fruit are often distorted and discolored, remain small, and, when severely infected, produce a negligible amount of seeds.

Peppers infected with CMV develop mosaic and necrotic symptoms. In greenhouse peppers, short-lived vein-clearing patterns may develop. In field and greenhouse peppers, mosaic symptoms will fade over time and leaves will become dull green, brittle, and leathery. Systemically infected leaves become narrow and remain small, and plants appear stunted due to shortened internodes. Infected plants will often produce the same number of fruit as uninfected plants, but fruit will be small and fewer will be marketable quality. Fruit has a wrinkled, bumpy appearance, pale to yellowish green color, and often ripens irregularly. Sometimes, fruit will develop sunken lesions with necrotic centers. In some varieties, necrotic lines or ringspots will develop. As in tomato, symptom severity is influenced by the maturity of the plant at the time of infection. Young plants are more likely to develop symptoms as described above, whereas older plants have more resistance to CMV and show few foliar or fruit symptoms.

The most characteristic symptom of CMV in tomato is filiformity, or the development of thin, shoestring-like leaves. In early stages of infection, foliage will also turn yellow and plants will become bushy and stunted with mottled leaves. Foliar symptoms can be transitory, meaning that the bottom- and top-most leaves will be affected but middle leaves will remain symptomless. Severely affected plants often do not produce fruit, and any fruit that does form remains small, becomes mottled or necrotic, and has delayed maturity. In greenhouse tomatoes, leaf chlorosis and subsequent mottling is easily observed, along with plant stunting. In field tomatoes, if plants are infected when they are young, the mosaic symptoms can be slightly masked by leaf deformation and upward cupping or rolling. If field tomatoes are infected when they are slightly more mature, leaves are less likely to become deformed, so mosaic symptoms are more obvious.

The primary source of CMV infection is from infected weed or crop hosts bordering a field. CMV is vectored by at least 75 species of aphid in a non-persistent manner, meaning that the virus does not remain in the aphid for more than a few hours. Aphids pick up the virus in under 1 minute while feeding and will then spread the virus to any susceptible hosts it feeds on while the virus persists inside its stylet. The length of time the virus persists within the aphid depends on many factors, including aphid characteristics, virus strain, environmental conditions, and weather. The virus is also easily transmitted mechanically. There is no evidence that the virus is seed-borne in any vegetable hosts, but it has been reported to be seed-borne in other hosts.

Crops affected by this disease include: