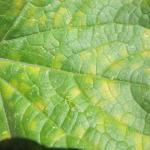 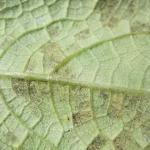 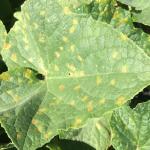 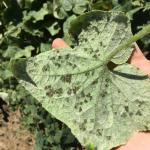 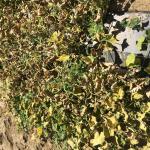 Downy mildew caused by Pseudoperonospora cubensis is one of the most important foliar diseases of cucurbits. It occurs worldwide where conditions of temperature and humidity allow its establishment and can result in major losses to cucumber, melon, squash, pumpkin, watermelon, and other cucurbits. Downy mildew can begin to develop at any time during cucurbit crop development in the northeastern US, usually arriving in the Northeast around mid-August. Fortunately it has occurred sporadically in this region, usually appearing late enough in the growing season that yield is not impacted. The pathogen is not a true fungus—it is a fungal-like organism called an oomycete. The pathogen produces wind-borne spores that can be carried long distances on wind. When the spores land on susceptible cucurbit host leaves, they infect, grow within the leaf, and produce fuzzy gray sporulation only on the undersides of the leaves.

Symptoms of downy mildew are confined to the leaves and their appearance varies widely among cucurbit species. On most species, lesions are first visible on the upper leaf surface as small, irregular to angular, slightly chlorotic areas. Symptoms appear first on older leaves and progress to younger leaves as they expand. When conditions (leaf wetness and humidity) favor sporulation, the production of fruiting bodies (sporangia) on the lower leaf surface gives the undersides of the lesions a downy appearance, varying in color from light gray to deep purple. Lesions can coalesce and result in large areas of dead tissue which exposes the fruit to sunscald. Extensive defoliation can occur when conditions are favorable.

Pseudoperonospora cubensis infects only members of the cucurbit family and is an obligate parasite. Its survival depends on the presence of cucurbit hosts, either in climates which permit their growth year round or in greenhouse culture. The source of primary inoculum in cold climates is windblown sporangia from areas where plants survive the cold season. Generally, Downy mildew of cucurbits does not arrive in southern New England until September. However, in some seasons it can move up the eastern seaboard early and arrive in July. The progress of Downy mildew is tracked by the  the Cucurbit Downy Mildew Alert System (http://cdm.ipmpipe.org/). Physiological specialization occurs in P. cubensis and at least five pathotypes have been described. Cucumber and melon are susceptible to all pathotypes, while squash and melon cultivars vary in their reactions. Spread of Downy mildew within a field can be by air currents, rain splash, workers, and tools.

The main means of control are fungicide applications, the use of resistant cultivars, and cultural practices. Maximum control can be achieved only with a combination of these measures.