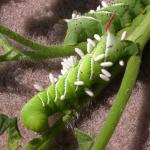 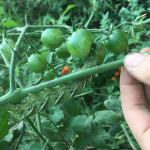 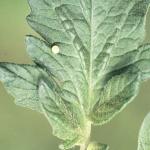 Late July and early August are usually the time when we see tomato hornworms. These large caterpillars typically appear in small numbers and cause their impressive feeding damage to just a few leaves or plants. Larvae consume large amounts of foliage on peppers, tomatoes, eggplant, potatoes, and related solanaceous weeds.

Full-grown larvae burrow 3-4 inches into the soil and form dark brown, two-inch long pupae. A sheath for the mouthparts projects from the head of the pupa and curves downward, resembling the handle of a pitcher.

There is one generation per year in northern areas. The adults are large moths, predominately gray or gray-brown with lighter markings. They are commonly referred to as sphinx, hawk, or hummingbird moths.  The adult tomato hornworm is known as the five-spotted hawk moth while the adult tobacco hornworm is called the Carolina sphinx. The wingspread may reach five inches and the hairy, robust abdomen has yellow spots. They emerge from over wintered pupae in the soil in late spring or early summer. The moths are commonly seen at dusk, hovering hummingbird-like over beds of petunias and other flowers with long corollas. Nectar is extracted through their long, coiled, tube-like mouthparts.

Scout by searching leaves for damage, frass or larvae. Often one sees defoliated stalks or the characteristic dark-green droppings (fecal pellets) before the caterpillar is located.

There is no set economic threshold for this pest in tomato. Where damage is unacceptable, or if there are high numbers, foliar sprays can be used.

A parasitic Braconid wasp is an important and fairly common natural enemy of the hornworms. The wasps lay their eggs inside the body of the caterpillars. After feeding within the caterpillar body, the larvae of the wasps eat out through the skin and spin the cocoons on the caterpillar surface. The adult wasps later cut out circular lids and escape from the cocoons to attack other hornworms.  If one is hand-picking hornworms, those with cocoons of parasitic wasps on their back should not be killed.

Use a selective material that will conserve beneficial insects, because those predators and parasites are very likely keeping your aphid populations under control. Insecticides  include Bacillus thuringiensis (Bt) kurstaki or aizawi strain (Dipel DF, Agree, or Xentari, etc.), indoxycarb (Avaunt), tebufenozide (Confirm 2F), or spinosad (SpinTor 2SC or Entrust). Several synthetic pyrethroids are also labeled (note: these could result in aphid outbreaks).  Although Bt usually works best on small larvae, in this case it will work very well even against large hornworms.  In peppers, any controls used for European corn borer should control hornworms.