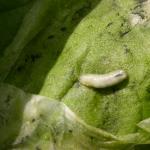 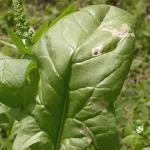 Spinach and beet leafminers, typically an early-season pest, may cause damage to early greens. These pests attack crops and weeds in the plant family Chenopodiaceae, which includes chard, beets, and spinach as well as several weed species including lamb’s quarters. The two fly species are very similar and have overlapping hosts. However, beet leafminers prefer laying eggs on beet leaves and spinach leafminer may also cause damage in Solanaceous crops such as peppers.

The fly overwinters as pupae in the soil and hatches in late April and May. The adult fly—a small, gray fly 5-7 mm long—then lays eggs on the leaves and the resulting larvae begin their damage.

The oblong white eggs, less than 1 mm long, are laid in neat clusters on the underside of the leaves and hatch in 3-6 days. They are easy to spot if you scout by looking under the leaves.  The maggots may migrate from leaf to leaf down a row. They become fully grown in just a few weeks and drop into the soil to pupate, though they may also pupate inside the leaf.

The entire life cycle is 30-40 days. There are three to four generations per season. These generations overlap and can cause continuous season-long damage to succession-planted spinach, beets, and chard. Typically mid-late May, late-June and mid-August are peak activity periods. After August, pupae enter the overwintering phase and won’t emerge until next spring.

Leafminer is a fly larva that burrows between the layers of a leaf eating everything but the epidermis. Early damage is a slender, winding ‘mine’, but later these expand and become blotches on the leaves. Inside the mine is a pale, white maggot. Spinach leafminer (Pegomya hyoscyami Panzer) and beet leafminer (Pegomya betae) are very similar species in behavior, appearance, plant hosts, and damage and generally cannot be distinguished in the field.

In most seasons the damage is minimal and the plants will out-grow it leaving only early leaves with cosmetic damage.  In other years, or other fields in the same year, the damage may be severe and if the plants are hit early and growth is slow because of weather conditions, the loss may be great. This may be especially true when eggs on transplants in the greenhouse go unnoticed until planting in the field, resulting in infestations in row-covered crops. Treat when eggs or first tiny mines are noticed.

Begin scouting susceptible crops in mid-May.  Scout undersides of leaves for eggs and treat when they are first observed in order to target larvae as they hatch.

There are effective treatments available for both conventional and organic growers.  For current recommendations and information on production methods (including varieties, spacing, seeding, and fertility), weed, disease, and insect management, please visit the New England Vegetable Management Guide website.

Adapted from an article by Eric Sideman, Maine Organic Farmers and Gardeners Association