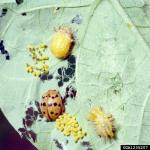 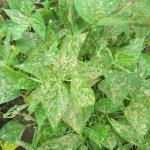 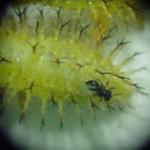 While they are not a pest on every farm, some farms report significant damage from Mexican Bean Beetles (MBB) and have to take action to prevent crop loss. They may be pests on snap beans, lima beans, and, more recently, soybeans. Soybeans are a less suitable host for development and survival compared to snap beans, but crop damage can ocur on both crops. Using biological control can reduce the need for insecticides; see below for details.

Mexican bean beetle adults are coppery brown with black spots. They look very much like large ladybeetles and in fact are closely related – but unlike lady beetles they feed on leaves, not other insects. Shortly after adults arrive in a bean field, they lay yellow-orange egg masses in clusters of 40 to 50 on the underside of bean leaves. These hatch into bright yellow, spiny, oval larvae, which feed, molt several times as they grow, and pupate on the underside of leaves. Feeding damage from adults and larvae can reduce yield and injure pods if numbers are high.

Mexican bean beetles overwinter as adults, and seek out beans for feeding and reproduction. Overwintering adults colonize beans in June. There are 2-3 generations per season, usually increasing in numbers with each generation. The complete life cycle takes 30-40 days in the summer months, but closer to 60 days when temperatures are cooler.

Adults and larvae feed primarily on leaves, but when numbers are high they will also damage pods. Feeding occurs on the underside of leaves, but causes death of leaf tissue in a lace-like pattern.  Feeding damage over 10-20% can cause yield loss. Plants are most sensitive in the pod fill stage.

Treatment with an insecticide may be warranted to prevent economic losses. A suggested treatment threshold is >20% defoliation during pre-bloom or 10% during pod formation. Several conventional and organic insecticides are labeled for use against MBB, including several products that also effectively control potato leafhopper, which is also a major pest of beans and which we’re seeing now in bean fields. Be sure to get coverage of lower leaf surfaces. Kaolin clay (Surround) may be used on seedlings and young plants to deter feeding and egg laying. For more information on chemical control options, see the New England Vegetable Management Guide.

Chemical controls for MBB and potato leafhopper could have harmful effects on Pediobius, especially on adult wasps. If releasing Pediobius, avoid sprays shortly before or after releases; apply treatments to a succession planting 5 days before release.