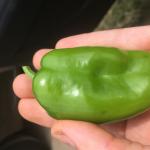 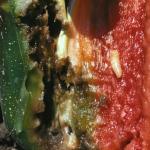 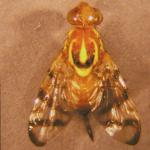 Pepper maggot is closely related to apple maggot and has one generation per year. Because flies lay eggs directly into pepper fruit, the damage often goes unseen until it is too late. The pepper maggot fly is found throughout eastern North America and its range within New England has been creeping northward and now extends into southern New Hampshire and throughout Massachusetts. It is often a farm-by-farm or field-by-field phenomenon without any clear reason for high or low populations that occur in a particular place.

The best way to detect pepper maggot activity is to look for stings on the fruit, which are easiest to spot on cherry peppers. Pepper maggot flies are smaller than a house fly, bright yellow with three yellow stripes on the thorax, with green eyes, and clear wings with a distinct banding pattern. On a daily basis, flies enter the field and return to the surrounding forest, passing across the border areas. Females insert their eggs directly into the pepper fruit and leave a small dimple – an oviposition sting or scar. The legless white maggots feed and tunnel inside the fruit, especially in the placenta, causing soft spots on the wall of fruit and brown mines within. Maggots reach about ½ inch in length over a period of about two weeks, and have no distinct head capsule; this distinguishes them from ECB larvae, which have brown head capsules. When they are ready to pupate, they exit at the blossom end, leaving tiny round exit holes. These holes allow for the entry of soft rot bacteria into the fruit. Sometimes the oval brown pupae can be found inside the fruit. Often damage is detected only because of premature ripening or decay of the fruit.

Adults emerge in mid- to late July and actively lay eggs in pepper fruit for several weeks. Eggs hatch into maggots, which tunnel into the fruit, and then exit at the blossom end when they are ready to pupate. Pepper maggot pupates in the soil and overwinters as a pupae before emerging the following spring as an adult where last year's host plants were.

It is effective but difficult to monitor for pepper maggot flies; to successfully capture the flies, you must place yellow sticky traps baited with a vial of 28% ammonium hydroxide 20 feet up in maple trees along hedgerows.  Check and change traps twice weekly to record changes in fly activity. A simpler way to monitor for fly activity is by scouting their preferred crops for ovisposition scars—the marks left by egg-laying females. The flies prefer to lay eggs in the small (1-3 cm in diameter) round fruit of cherry peppers, and when these are planted in border rows around a pepper crop they work very well as indicator plants. Oviposition scars appear as depressions or scars and are easy to find on these small, round fruit. By timing insecticide applications with the first occurrence of the stings on the indicator plants’ fruit, damage to the main crop can be avoided with minimal spraying. If cherry peppers are not part of your crop mix, look for stings on bell peppers—these are their second favorite type of pepper.

If this pest is a concern for your farm, consider using perimeter trap cropping. Plant one row of cherry peppers around the perimeter of the crop. These peppers are more attractive to the maggot flies than the sweet bells, so the flies will build up in the perimeter, allowing for a perimeter spray that will reduce pest populations and protect the main crop. Perimeter trap crop systems can be as effective as whole field sprays while drastically reducing pesticide costs.

If a given farm has a history of pepper maggot activity, then it is recommended that an insecticide be applied as soon as flies are captured in sticky traps or stings are observed. Once observed, make two insecticide applications, 10-14 days apart, with a material labeled for pepper maggot.

Since pepper maggot builds up on particular farms or fields rather than spreading out far and wide, you can make an impact on the population size on your farm over time by using cultural practices.