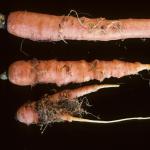 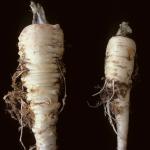 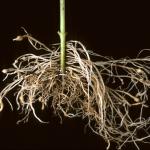 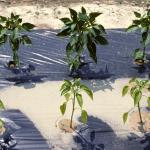 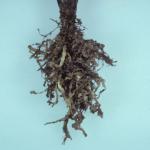 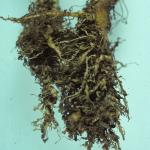 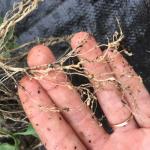 Nematodes are roundworms that occupy a vast array of ecological niches and have many different lifestyles. Of the more than 25,000 species of nematodes on earth, only a handful are known to feed on plants in the northeastern US. The species of greatest concern to vegetable growers in the region is the Northern Root Knot Nematode (NRKN), Meloidogyne hapla. Unlike the Southern Root Knot Nematode (M. incognita) and a few other species found primarily in the southern US, NRKN is capable of surviving the freezing temperatures of northern winters.

Symptoms may include stunting, wilting in the hottest part of the day, yellowing, loss of vigor, and uneven growth. Root crops such as carrots typically become forked. Symptoms are typically unevenly distributed in the field as nematodes do not tend to move far; symptoms may begin as small patches, but these may enlarge as the nematode population increases.
NRKN feeding induces formation of characteristic root galls, which interfere with proper root function. Feeding activity also robs plants of nutrients and causes wounds through which other pathogens may enter. Plants seldom die from nematode infestation alone, but nematodes can have a serious impact on plant health and crop yield. NRKN damage is also known to increase the severity of disease caused by some plant pathogenic fungi, particularly Verticillium and Fusarium.
If nematode damage is suspected, examine plant roots for galls. The number of root galls is dependent upon the nematode population density and the species and cultivar of the host. NRKN galls are about 1/8th inch in diameter but may be larger. Don’t mistake the nodules on legumes for root-knot galls- the roots of these plants develop these nodules as they form beneficial associations with soil bacteria. Club root of brassicas also resembles root-knot nematode galls but club root galls are larger.

NRKN can be introduced by infested transplants that were grown in field soil, but the nematodes also overwinter as eggs in the soil.  The eggs hatch when soil temperatures reach approximately 65°F (18°C), but embryo development may begin at temperatures <50°F (10°C). The juveniles molt four times, once inside the egg and then thrice after hatching; the last molt results in an adult. Juveniles are less than 1 mm long and enter into the root where they establish a feeding site next to the vascular system. The nematode remains sedentary, feeding in one site while undergoing successive molts until the adult stage. The adult is almost always a female and sac-like in shape. Their feeding induces formation of the characteristic root galls. A single female can lay a thousand eggs which are extruded to the surface of the root in a gelatinous matrix. At optimum temperatures (80°F, 27°C), the life cycle is completed in 3-4 weeks, so the population of NRKN in the soil can increase significantly in a short time.

The best way to manage NRKN in vegetable fields involves developing an integrated pest management (IPM) plan that may include growing resistant cultivars when they are available, crop rotation, cultural controls, and chemical applications.

Threshold Levels: NRKN populations and the levels of damage they cause may be influenced by temperature, rainfall, soil type, plant nutrition, crop/ cultivar susceptibility, and chemical applications. Accurate threshold levels are difficult to establish because of these variables.

Field Assay: Researchers at Cornell University have developed a simple field assay growers may use to estimate the severity of NRKN infestation in a field. For more information, click here. Keep in mind that this assay will only detect root knot nematodes- other species of plant pathogenic nematodes may also be present.

Accurate diagnosis is crucial to the development of an effective control program. Soil samples can be examined for root knot juveniles and other species of nematodes. If root galls are present, the roots and soil may be submitted for analysis. For information on submitting samples to the UMass Extension Diagnostic Laboratory for nematode analysis, please see https://ag.umass.edu/services/plant-diagnostics-laboratory/vegetable-floriculture-diagnostics