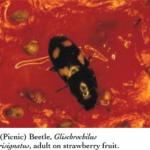 Sap beetles have generally been thought of as secondary pests of sweet corn, usually associated with damage caused by caterpillars, but on some farms they are a regular and troublesome pest in early sweet corn plantings. Early sweet corn varieties tend to have poor tip cover, allowing sap beetle adults to lay eggs near the tip, where tiny larvae burrow into the kernels, and make the ears unmarketable. Sap beetles can also be pests of strawberry and other fruits, so they tend to be more of a problem on farms that grow both fruit and corn. The beetles are attracted to decaying plant material, particularly fruit. Growers with sweet corn plantings that are close to peach or apple orchards, where over-ripe dropped fruit can attract adult beetles, are vulnerable to invasions into corn, and should pay particular attention for this pest when scouting. Sap beetle infestations tend to be worse in hot, dry years.

Sap beetles overwinter as adults, often in the woods near previous feeding sites. Early sweet corn silk is an attractive early-season feeding and egg-laying site, especially when fruits and other hosts are rare. They lay eggs in silks and the tip of ears. Eggs are milky white and resemble tiny grains of rice. The larvae are small, pinkish-white or creamy colored grubs about ¼ inch long. Full-grown larvae drop to the ground and pupate in the soil. There are several generations per year. The most common sap beetles in corn are the dusky sap beetle (Carpophilus lugubris), which is all black (3.5-4.5 mm long), and the fourspotted sap beetle (also known as picnic beetle, Glischrochilus quadrisignatus) which is black with four irregular yellow spots (5-6 mm long). The most common species in strawberries is the strawberry sap beetle (Stelidota geminate).

Adults are first noticeable about the time that tassels and silk appear. Males have an aggregation pheromone that attracts other beetles, both male and female. Adults move to corn at full tassel to feed on pollen, and build up as corn matures and silk turns brown. There are 2 to 4 generations per year with peak infestations in July (larvae) and late July and August (adults). Full-grown larvae drop to the ground and pupate in the soil.

Beetles may invade corn borer tunnels or areas with other insect or bird damage, but are also found in corn that is free of caterpillar damage. They may hollow out kernels of the upper half of the ear, making ears unmarketable. Adults may also hide between the layers of the husk. The problem can easily be overlooked until harvest, when adults show up in harvest bins and larvae are found in the ears.

Scout blocks at full tassel and early silk to determine if beetles are present. Unfortunately, there are no specific thresholds based on scouting. Insecticides may be warranted in fields with a previous history of at least 10% ear damage. Populations build when attracted to decomposing fruit, cull piles, or corn ears injured by birds or caterpillars. Ears with exposed tips, especially super sweet and Bt varieties, are susceptible to infestation. To prevent or reduce damage, select varieties that have good tip cover, use clean cultivation, control ear-infesting caterpillars and remove or bury decomposing fruit on a regular basis. Insecticides will not completely control heavy infestations.

Cultural controls are essential to managing sap beetles. Ears with exposed tips, especially super sweet and Bt varieties, are more susceptible to infestation. Research has shown that both the length and tightness of the tip cover is important to reduce infestations. Some varieties with long, tight tip cover include: Accord, Argent, Avalon, Awesome, Bon Jour, Cuppa-Joe, Easy Money, Fantasia, Ka-Ching, Precious Gem, Prime Plus, Profit, Providence, and Renaissance. To prevent or reduce damage, select varieties that have good tip cover, use clean cultivation, and control birds and earinfesting caterpillars. Eliminate or bury deeply any cull piles or other areas with decaying vegetables or fruit, included infested ears. Do not leave infested blocks standing; mow aggressively to chop ears as soon as the block is finished. Deep plowing may be necessary after harvest if infestations are high, to bury ears at least 4” deep.