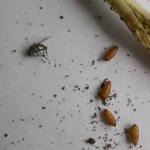 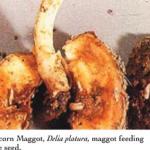 Seedcorn maggot larvae feed on the seeds and young seedlings of a wide variety of vegetable crops. The first plantings of large-seeded crops such as corn, beans, and peas are often attacked, as well as early seedlings of spinach, onions, brassicas, tomato, cucurbits, and others.

Seedcorn maggot flies are nearly identical to cabbage and onion maggot flies -  delicate, hump-backed, brown flies, 5-7mm long - but are distinguishable by the fact that each fly will only appear near its host crop. Maggots can usually be found in the soil around and inside seedlings and seeds. The larvae, or maggots, are about ¼ inch long, yellowish-white and legless, with a pointed head. The adults look like small, delicate houseflies with a slightly humpbacked shape.

Eggs are laid on the soil surface near sprouting or decaying seeds, organic plant residue, or organic soil amendments such as manure or seed meals. In early spring, the adults emerge and lay eggs on the soil surface. They are attracted to volatiles released from freshly tilled soil, as well as to buried cover crop residues, rotting manure, compost, organic surface residues (as is found in reduced till), and other organic amendments such as fish, soybean or cottonseed meal. Previously injured or diseased plants may also attract egg-laying. The eggs hatch within 2-4 days at soil temperatures of 60°F, and 7-9 days at 41-45°F. Maggots burrow downward in search of food and penetrate seeds as the seed coat splits open.

One reason for the early activity of maggot flies is their ability to develop at a lower threshold, or base temperature, compared to many other insects—39°F (4C) instead of the usual 50-55°F (10-13°C). Like other insects, they develop faster at higher temperatures, with optimal growth around 70°F (21°C). Emergence can be estimated using cumulative growing degree days, starting January 1st. Degree days can be calculated on a daily basis by using the formula: [(Max temp – Min temp)/2 ] – base temperature. To use GDD accurately, it is important to keep track of whether you are in Farenheit or Celsius, and to use a base temperature suited to the insect (or plant) of interest. Scientists have determined the accumulated GDD required for seedcorn maggot to reach peak adult emergence for first, second and third generation flies. This model is based on GDD accumulated since January 1st at base 40°F/4°C.

The second and third generation peaks may be variable for a number of reasons, including the ability of larvae to enter dormancy when it gets too hot. Thus it may not be easy to track the successive generations, but it is the first generation that causes the most damage. Crops that are planted in wet soil, or soil that is too cool to support quick germination and seedling growth, are especially susceptible to damage. Seedlings are sometimes able compensate and recover from seedcorn maggot injury, depending on: the number of larvae per plant, the crop (eg. cantelope is less able to recover than bean or corn), seedling size, and growth conditions. Conditions that favor crop emergence and growth help seeds and seedlings escape or recover from injury.

Seed corn maggot attacks seeds - especially large seeds like corn, beans and peas – as well as seedlings of a wide variety of plants. Decay from soil pathogens or previous insect feeding makes seeds or seedlings more attractive to seedcorn maggot. Moist, freshly turned soil is preferred over dry or saturated soil. Damage may be to the seed itself or to roots, stems or cotyledons.

The first symptoms are usually poor germination or wilting of transplants that have lost their roots to feeding larvae. Symptoms can be difficult to distinguish from other problems, such as damping off due to Pythium and other soilborne fungi, or wireworm feeding. Symptoms may also be similar to damage caused by the cabbage or onion maggot, but seedcorn maggot becomes active two or more weeks earlier in the spring than do the other maggot flies. Prevention is key in managing this pest. By the time you see damage, it is too late to control the problem using either cultural or chemical methods.

Unfortunately, practices that enhance organic matter in the soil may actually worsen seedcorn maggot problems. For example, one field where seedcorn maggot caused significant damage to early peas had been rotated through two years of rye cover crop to build organic matter. Another instance occurred after a thick winter cover of vetch and rye. Conditions that cause slow seed emergence (cold, wet soils) favor seedcorn damage, while those that favor faster crop growth (warmer soils, moderate moisture) help the crop get established before damage occurs. Where possible, delay planting for several weeks after a cover crop is incorporated to help reduce seedcorn maggot problems.