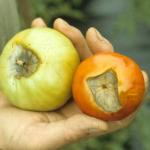 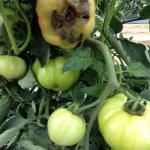 Blossom end rot is a noninfectious, physiological disorder of tomatoes and peppers, caused by a localized calcium deficiency in the blossom-end of the fruit.

On both tomato and pepper, symptoms of blossom end rot first appear as light-tan, water-soaked lesions, usually on the distal end of the fruit but occasionally on the side of the fruit. The lesions then enlarge and become black and leathery, and are often invaded by Alternaria alternata, a saprophytic fungus that attacks dead tissue. In tomato, internal black lesions may also develop, which are sometimes not visible until the fruit is cut open. Affected fruit usually ripens faster than normal. Blossom end rot symptoms are similar to those of sunscald, however sunscald will only occur on the side of the fruit that is exposed to the sun, while blossom end rot can occur on unexposed fruit surfaces.

Blossom end rot is caused by a localized calcium deficiency in the distal end of the fruit. Calcium is a relatively immobile element; calcium-uptake is therefore heavily influenced by anything that affects water uptake by a plant. Early fruit on young plants are most susceptible, because as young plants become established and begin growing more rapidly, they require more water and calcium.

Calcium deficiency and, subsequently, blossom end rot, is caused by any disruption of water-uptake. Lack of water, even short-term, especially after heavy rainfall, will result in reduced calcium intake. High humidity, which causes a reduction in evapotranspiration and water uptake in plants, will have the same effect. High soil salt levels, applications of ammonium nitrogen, and root pruning or damage can also contribute to calcium deficiency. Excessive nitrogen application under conditions that promote blossom-end rot will exacerbate the problem. Additionally, blossom end rot can be a symptom of herbicide injury from phenyoxy (e.g. 2,4-D) and substituted benzoic acid (e.g. dicamba) herbicides.