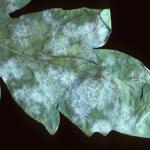 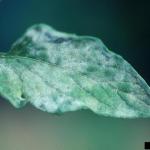 Powdery mildew (Oidium neolycopersici) of tomato is emerging as an important disease of greenhouse crops. Unlike most powdery mildews that are host specific, this pathogen has a wide host range of at least 13 plant families including the Solanaceae, Alliaceae, and Cucurbitaceae. The various powdery mildews cause similar symptoms on their host crops though – white, powdery sporulation on both the tops and undersides of leaves, in round spots that begin small but expand and converge and can eventually cover an entire leaf. Spores are dispersed by wind and spores take about one week to infect, grow, and produce new sporulation.

Symptoms appear on foliage as light-green to bright yellow lesions on the upper leaf surface. The spots enlarge and become necrotic. Lesions may exhibit concentric rings similar to early blight. A light, powdery coating may be seen on leaf undersides. Under conditions favorable for disease development, a dense, white layewr of growth may develop on both leaf surfaces. Entire leaves wither and die, but remain attached to the stem. There are no symptoms on fruit or stems, but loss of foliage may results in sunscald.

O. neolycopersici does not overwinter outdoors in northern climates. The pathogen overwinters in weed or crop hosts in the greenhouse. Conidia produced in southern areas are blown north by prevailing winds. This pathogen is favored by low light and cool temperatures. In contrast to other fungal plant pathogens, it does not require free water to germinate and cause diseases.

Cultural controls can help reduce powdery mildew severity but will likely not prevent the disease. Although O. neolycopersici does not require high humidity to infect, the pathogen thrives in humid environments (up to 95% relative humidity). Removing lower leaves and increasing plant spacing will improve air circulation and can improve spray coverage.

Fungicides are the primary management tool for managing powdery mildew. Fungicides are not curative in plants, so they must be applied preventatively, before or just after symptoms begin developing. Micronized sulfur (e.g. Microthiol Disperss) and mineral oil (e.g. JMS Stylet-Oil) are the most effective products for organic production, and are also good choices for conventionally produced crops. Apply sulfur at its lowest labeled rate because plants grown in protected culture tend to be more sensitive to phytotoxicity than field-grown plants. Also, without rain or overhead irrigation, fungicide residue will remain longer on plant tissue. As stated on the labels for these fungicides, if you are using both sulfur and oil to manage powdery mildew, there needs to be a gap of 2 or 3 weeks between applications of these products because oil can move sulfur into the leaf resulting in damage. Applications of sulfur especially during the harvest period may leave visible residue on fruit, which can be easily wiped off. An option to minimize visible residue is to use sulfur for the first applications until fruit start to mature, switch to another product for an application or two, then start applying oil.