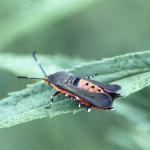 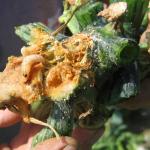 Squash vine borer moths are day-flying ‘clear wing’ moths with a 1.0 to 1.5 inch wingspan, black forewings, clear hind wings, and a bright orange abdomen. These clearwing moths are so called because of their transparent hind wings that, when in flight, make them look like wasps. There are 1 to 2 generations each year and adults emerge in late June/early July. Peak flight is in mid-July. A second generation in late August has been indicated by trap captures in seasons with particularly high degree day accumulation. Moths usually fly for a couple of weeks before beginning to lay eggs, and their lifecycle lasts about 60 days. Each female can lay 150-200 eggs. Eggs are oval, redish brown in color, and glued to the stem or petiole. Eggs hatch in 10-15 days. The large cream-colored larvae are 1 to 1 1/2” long and 3/8” wide.

Within hours of hatching, the larvae bore into stems, where they feed for 4-6 weeks before exiting to drop into soil, spin a brown cocoon, and pupate not far below the surface. They remain in the soil until the following spring, or may hatch as adults for a second flight in late summer. The pupae survive the winter 1 or 2” deep in the soil. Spring or fall plowing buries pupae deep in the soil and reduces survival of overwintering populations. Preferred hosts have thick stems, while thin stemmed squashes tend to be more resistant to attack. Yields of summer squash can be reduced by 1/3 if infestations exceed 5 larvae per plant.

Larval feeding within vines causes leaf stems to wilt and collapse, reducing fruit yields, and can even sever a plant from its roots. Smaller plantings often suffer more injury and damage than extensive plantings because eggs are concentrated on fewer plants. Occasionally larvae will bore into fruit of hard squash and pumpkins; this most commonly occurs when a second generation of moths are laying eggs late in the summer when fruit is present. Thick-stemmed species including C. pepo (summer squash, zucchini, pumpkin) and C. maxima type winter squashes (e.g. Hubbard, Buttercup) are preferred and are most suitable for larval development. Pumpkins can sustain high infestations without yield reduction. Generally, vining plants can withstand higher infestations compared to bush-type plants, as they tend to root at the vine nodes, allowing the vine to survive despite having borers within the stem. Crops and varieties with thin stems, including Butternut squash, cucumber and melon, are considered resistant to this pest.

Growers should scout their pumpkin and squash fields weekly for squash vine borer from late June through early August, or when 900 base 50ºF growing degree days have accumulated. Examine the base of vines for evidence of larval feeding (sawdust-like frass near entrance holes) and then split open the stem to confirm the presence of larvae, which suggests more eggs are being laid. Alternatively, flight of adult moths can be monitored using pheromone baits in traps placed just above the plant canopy.  The best kind of trap to use is a large, cone-shaped net like the Scentry Heliothis traps but a bucket-type of trap or yellow sticky cards can also be used. When 5 moths per week are captured, pesticide applications should be initiated.

Once the first adult moths are captured, check the bases of stems for eggs, sawdust-like yellow-orange frass, or entry holes of larvae. Cutting open the stem just above the hole is a good way to find out if damage has just begun or if the larvae are already well developed in the field.

Timing sprays to target larvae as they hatch out of eggs is very important. Sprays should be directed at the plant bases, at crown or runners.

Materials used for control of hatching SVB larvae include pyrethrins, pyrethroids, carbaryl, as well as Bacillus thurigensis (Bt) toxin formulations, especially those made from B. aizaiwi.  Make 2 to 4 weekly applications when more than 5 moths per week are captured in pheromone traps (check Vegetable Notes pest alerts for trap count data throughout the growing season), when eggs are observed, or when 900-1000 GDD base 50ºF have accumulated.