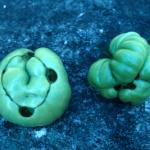 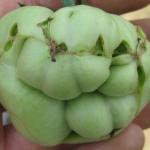 Tomato catfacing is a physiological disorder of field and greenhouse tomatoes. This disorder has not been extensively researched and is not fully understood. Incidence of catfacing can increase chances of fruit becoming infected via the rough blossom scar by black mold rot, a disease caused by several different fungi, under certain environmental conditions.

A tomato is considered “catfaced” if the blossom scar is enlarged or perforated. Often times, the fruit becomes extremely misshapen, but fruit distortion is not necessary to classify it as catfaced.

Little research has been done on tomato catfacing, and the causes of the disorder are not fully understood. Cold temperatures during flowering has been shown to increase incidence of catfacing, as have extreme fluctuations in night and day temperature. Under some conditions, pruning and high nitrogen levels can increase incidence of the disorder. Additionally, damage from thrips to the side of the pistil of flowers can cause catfacing.